I'm feeling pretty sad today, as our pet cockatiel, Percy, got out and flew away yesterday, as Jill was packing the car to go away for a few days. Easily enough done, as he could be sneaky: in the past, I've walked out the door with a bag of garbage and found him sitting on me!

Apparently, he flew up, up, into the sky, and then away.

Percy was talkative, and a brilliant whistler, so I'd taught him a few tunes, and he was also handtamed and liked to be tickled. Cockatiels are wonderful birds, but I suspect he was one of the best!

I'm missing him a lot, as he would usually be around when I was scripting or drawing (like most of our pets, he had the run of the house most of the time). He'd often be chewing the corner of my drawing board (or my pencil if I let him), or be perched somewhere close by, if not off visiting in the rabbit and guineapig cage.

The children are very sad and will really miss him when they get back. 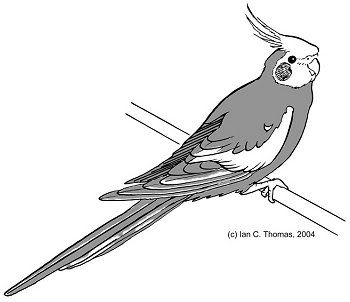 I've put ads everywhere I can think of, and contacted various appropriate organisations. If you're in the Melbourne area and a talkative grey cockatiel turns up, then you know who to contact!

Well, I'm a complete bloggin' novice! Not sure if my thoughts are worth anything, but a few things have happened that it'd be nice to note down, while I'm thinking about them.

My acrylic painting tips page at: has attracted more emails than anything else. It's apparently useful, and I can see why! If only I'd known some of this stuff before I started, rather than having to learn the hard way.

Also, my second episodes of two comic series I started last year, Riffin' to Oblivion and Children of the Moon, are about to come out in The Ink, #2 and Xuan Xuan vol. 2. no. 2, respectively.

Last night, I finally worked up two new Manga characters for a short piece in new Australian Manga comic, Oztaku, if I can only get them done by the deadline. Funny how it takes a few goes to get character design right, and to actually start to get a feel for their movements, expressions and personalities, even with the script already done.

This morning, from the train, I saw a young fox looking out from some weeds on a siding, just casually watching the train go by. I know they're vermin here, and I'm a member of the WorldWide Fund for Nature, but at an aesthetic level it was still very pretty, and it's nice to see anything wild on an average day, even a feral :-).