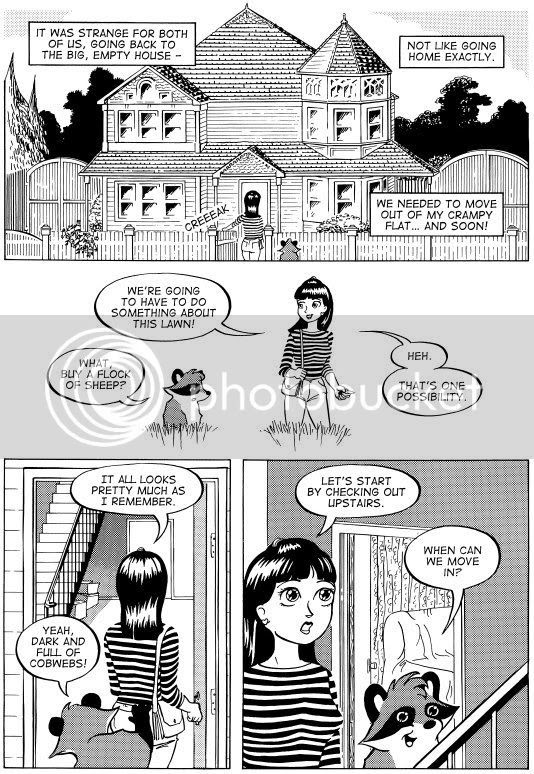 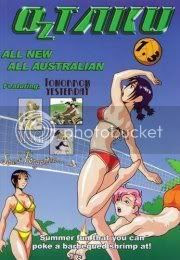 On Monday I picked up a couple of copies of OzTaku #1.3 from Borders. It features the longest Moth & Tanuki story so far - an 8 pager, the first of two parts. Jill says it's the best thing I've ever done, which is possibly right. The story almost wrote itself and does manage to be a bit textured and nuanced, while still being funny (important!). It fills in some backstory, but also moves the whole series forward, with the emphasis more on Moth (so, a nice counterpoint to the Mania series).

From an art point of view I worked as starkly black-and-white as possible, using contrasting lines (particularly horizontals and verticals). The moires on the scan are where I've used screentones, again limiting myself to broad textures (as far as I'm concerned, screentones count as dotty b&w textures, not as muddy greys).

The Children of Hurin 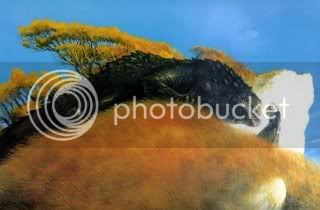 Therefore walking at guess she found the hill, which was indeed close at hand, by the rising of the ground before her feet; and slowly she climbed the path that led up from the east. And as she climbed so the fog grew thinner, until she came at last out into the sunlight on the bare summit. Then she stepped forward and looked westward. And there right before her was the great head of Glaurung, who had even then crept up from the other side; and before she was aware her eyes looked into his eyes, and they were terrible, being filled with the fell spirit of Morgoth, his master."
J.R.R. Tolkien Unfinished Tales (edited by Christopher Tolkien)
(Picture of Glaurung and Nienor by John Howe)

I remember many years ago finding myself staring at a poster map of Beleriand in The Little Bookroom in Melbourne. For a kid who had grown up fixated on Tolkien, even to the point of bothering Rayner Unwin with a package of Lord of the Rings drawings in about 1977 (when we were making a comic of The Hobbit for the school magazine), the discovery that there was going to be more from Tolkien - let alone a whole new world - was a revelation!

As great as The Silmarillion turned out to be, somehow its abundance of ideas and imagination wasn't fully realised in terms of consistent narrative depth. Christopher Tolkien did a stellar job of cobbling together his father's work into a cohesive whole, but often the text lacked the glorious prose and evocative mastery that came from J.R.R.'s writing and rewritings. Christopher had been often obliged to choose between different versions in order to put together the narrative, though less so with The Silmarillion than many of the later collections. Apparently, Guy Gavriel Kay suggested early on that some of these tales could be completed as books in their own right, but CT chose to keep the works pure and release them largely as a series of incomplete tales. 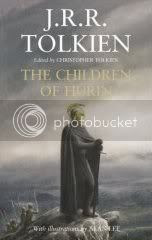 Coming up on 17th April is the release of an all-new Tolkien book, The Children of Húrin. This would may surprise some, but one of my favourite Tolkien books is the excellent Unfinished Tales, which contains a collection of Tolkien's most finished tales outside of his famous work, and includes a substantial and enjoyable version of this story.

Probably, my favourite part of Unfinished Tales is Of Tuor and his Coming to Gondolin, a sublime piece of writing that just cuts off at the end. While this is related to, but not included in, The Children of Húrin (Tuor is Túrin's cousin) it certainly has the potential to be a fantastic tale in its own right. 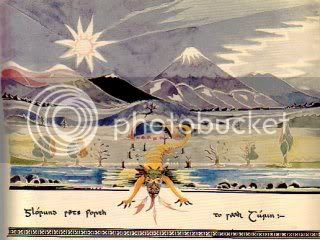 At left is a very old ink and watercolour picture by Tolkien himself, showing a much earlier incarnation of "Glorund" setting forth to seek Túrin. However, Glaurung isn't a likeable dragon like Smaug or Chrysophylax - he's something else altogether.

In reading Unfinished Tales it is often necessary to step backward and forward to The Silmarillion in order to bridge the pieces. A complete book of the The Children of Húrin will be very welcome, but don't expect an uplifting saga in the vein of The Lord of the Rings. With all the grace of classic tragedy this is a dark journey with a sting in its tail, from a true master writer.

Labels: The Children of Hurin, Tolkien

The April issue of Mania, #71, is now out, featuring a story with Tanuki effectively going solo. It also brings back that boy from Sk8brd Tanuki, so he's now an ongoing character for this series.

The concept for this one is pretty straightforward. It was an interesting process, because the story started life as a one pager (which I never finished inking), then I rescripted it as a two pager, and it finished up as four pages. While it's fairly simple, I think the final result is the ideal length.

Of course, I made one minor mistake in the finishing stages, but most people I've showed this to can't spot it. No matter how hard you scour printouts of your story before submission, some minor thing seems to get through. I used to wonder why other people let this happen - now I know :).

This is the brightest colour scheme I've used in print yet, centred around almost primaries. I was overjoyed with the result - it practically glows in the magazine. This isn't to say I'll always work similarly. The boy character usually requires a red of some sort for consistency (on his hat), whereas I often work in a palette that excludes reds.

I'm playing around with colour schemes a lot in these episodes. The one I'm currently working on is much more subdued - I wasn't even sure I liked it until I started placing the colours on the pages.

The little purple guy in the pic at left is the same robot seen floating in the bath in OzTaku #1.2, so possibly another ongoing character...

New and rediscovered species in 2007

Indonesia appears to be the new environmental discovery hotspot. I'd been reading up a bit on the wildlife of Sumatra and Borneo lately anyway (the book The National Parks of Sarawak having piqued my interest).

It's funny, but I remember looking at the clouded leopards in Melbourne Zoo and thinking they weren't quite as I remembered from pictures in books. All is explained!

From theBBC news "Clouded leopards found on Sumatra and Borneo represent a new species, research by genetic scientists and the conservation group WWF indicates. Until now it had been thought they belonged to the species that is found on mainland southeast Asia."

"Genetic research results clearly indicate that the clouded leopards of Borneo should be considered a separate species," said Dr Stephen O'Brien, head of the US National Cancer Institute's Laboratory of Genomic Diversity. "DNA tests highlighted around 40 differences between the two species."
Apparently, the two species diverged at a similar time to lions and tigers - over a million years ago. Given the evident physical differences in coat markings, there must be quite a few naturalists and scientists having a "Doh!" moment over this one. However, telling the difference between a species and a subspecies isn't always so easy (ask anyone who has studied tree-kangaroos, or even ringtailed possums).

WWF, which maintains a large conservation operation on Borneo, estimates there are between 5,000 and 11,000 clouded leopards on the island, with a further 3,000 to 7,000 on Sumatra.

"The three governments with territory on the island - Indonesia, Malaysia and Brunei - signed an agreement earlier this year pledging to protect the "Heart of Borneo", 200,000 square kilometres of rainforest in the middle of the island thought to be particularly high in biodiversity."

That's a promising commitment on two islands highly troubled by land-clearing, mostly for the expansion of palm oil plantations, and logging for the pulp & paper industry, both legal and illegal. Sumatra and Borneo contain some of the world's richest biodiversity in their rainforests. 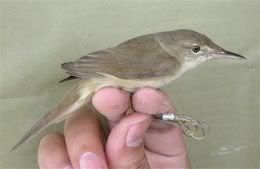 When we used to live down in Aspendale, along the creek there was often beautiful singing in the evening, which was my first real awareness of reed warblers - a widespread but secretive wetlands bird. This one looks a bit like an exaggerated version of the usual reed warbler.

From The Telegraph long thought extinct Large-billed reed-warbler isn't extinct after all: "A bird last seen alive in India almost 140 years ago and considered extinct has been rediscovered at a Thai sewage works by a British researcher. Philip Round, assistant biology professor at Mahidol University in Bangkok, made the discovery by chance when he was ringing birds in reed beds at a waste water treatment plant south-west of the Thai capital.

"Although reed-warblers are generally drab and look very similar, one of the birds I caught that morning struck me as very odd. Something about it didn't quite add up," he said. "It had a long beak and short wings. Then it dawned on me. I was probably holding a large-billed reed-warbler. I was dumbstruck. It felt as if I was holding a living dodo."

Back in Sumatra again, Biologists record call of rare Sumatran ground cuckoo for first time - "A team of biologists with the New York-based Wildlife Conservation Society (WCS) have recorded for the first time the call of the extremely rare Sumatran ground cuckoo, found only on the island of Sumatra in Indonesia. The bird was captured by a trapper and handed over to WCS biologists, who recorded the bird’s call while it nursed an injured foot.

"Ornithologists believed the bird was extinct until 1997, when a single individual was briefly seen. Until now, however, no one knew the bird’s call - a key field diagnostic ornithologists use to identify birds that live in forest."

The picture (of a different individual) was taken last year with a camera trap set up to search for other critically endangered species such as the rare Sumatran tiger and Sumatran rhinoceros.