The latest Fist Full of Comics was released a few weeks ago, and it continues to get bigger and better, with even more pages at 36 this time and a wide range of material from local comics artists. 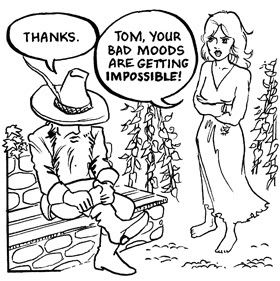 My piece is a one pager about domestic life. I'd been wanting to look in on these characters at the beginning of the Seventh Age and see how they were doing after so much time, tucked away in some obscure corner of Hertfordshire or wherever. I figured Tom would be feeling pretty midlifey by now.

I enjoyed drawing this a lot, though I don't know how successful it is as a piece. The style, which is a fairly traditional comic look, is one I tend to avoid, as reviews have described it as "boring." Lately I'm drawn to it - I don't find it hard and it seems to be an evolution of my earlier work in stories such as "Riffin' to Oblivion." I think I'll just have to follow this way of working for a while to see where it goes.

When you create pictures they can turn up in odd places, completely without your permission and often without your knowledge. I remember one year drawing a Santa for a Christmas card at a place I was working then, a year or two later, I found him still doing the rounds for some department or other, albeit having gone through a few generations of photocopying.

Here are some current examples of artwork being used without my knowledge.

These are good reasons why I don't tend to put full stories and all my artwork up online - it's bad enough having single images appropriated without being asked (I am quite approachable and only bite occasionally). Also, a good reason to sign your pictures, so they at least remain credited!