Healesville Sanctuary and a Quoll article 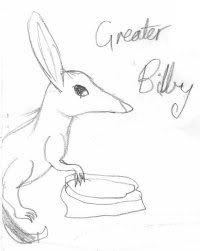 Today we went to a Vet Talk at Healesville Sanctuary (through Friends of the Zoo), which was fascinating and informative. Sasha, the locum vet who spoke to the group of parents and children, was brilliant - it's inspiring to hear someone speak who is so fully engaged with and committed to what they're doing, especially when it's so worthwhile! Her particular interest was in the area of veterinary orthopaedics, particularly of birds, and also diet, though she had worked with all kinds of animals and birds, previously at Singapore and Taronga Zoos.

We walked around in the drizzle and saw many of our favourites. A lot of the birds and animals had babies, as they mate and breed over Winter. The mangy-looking old retired bilby had a new friend, the feathertail gliders had even tinier little ones, L got to pat a dingo and a red-necked wallaby, the apostle-birds were practically talking and the female tiger quoll was her usual friendly self (about to be fed). I've include some pictures from J and L's sketchbooks. 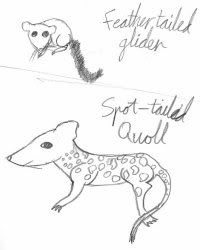 Quolls
Speaking of quolls... Today's Creature Feature, in the KidsView section of The Sunday Age Preview magazine (free with the newspaper) was on the Tiger Quoll, now mostly called the Spot-Tailed Quoll. While featuring such a little known animal is a good idea, unfortunately, as usual for these kinds of things it contained a lot of misinformation: one point begins with "Uniquely Australian" and another with "There are four species of quoll" - both wrong! Evidently, the bronze and New Guinean quoll (both from New Guinea) don't count. That's two points wrong with the other five basically right, so it could be worse. See also, previous Blog entry about monotremes. Honestly, I wish they'd ask me! :)

Comments:
Credit where credit's due - the last couple of Creature Features in The Sunday Age Preview have been excellent and completely accurate. They were on Goodfellow's tree kangaroo and the Sumatran tiger.