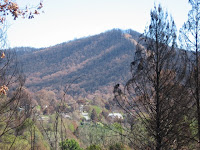 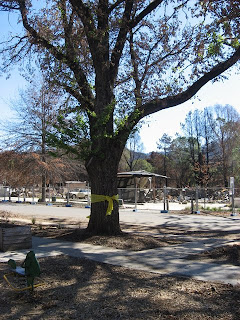 Yesterday we went back to Marysville, to sift through the ashes of Jill's Mum's house.

Once past Healesville, the burning was immediately evident and pervasive. There were small respites, such as in Fernshaw and Black Spur, but also a few patches of remaining green forest in other places, but these were few.

The brown colours of everything surprised me, subsconsciously suggesting Autumn hues, but the deathly stillness and silence told otherwise. Close to the ground were some signs of life returning, but the tall trees looked for the most part dead. In the forest surrounding Marysville, the tops were burnt right off many of them, as the fire had gone at once through 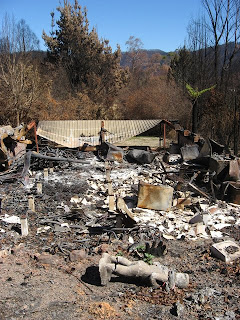 the canopy and understorey.

Of the house itself, only the basement walls, frame and some roof iron remained. In the dust, amongst the book ashes and melted glass, were the occasional remains of a coffee cup or the iron frame of the piano.

The plants in the garden mostly stood as they were though dead and brown. Stone paths through the garden remained, as did the Hills Hoist, alone apparently untouched by fire. Out the front was the garden gnome on his front, knocked down by the surging heat and looking like a remnant of Pompeii. We took him home, but he fell to pieces on the trip, the cement baked to cracking point. 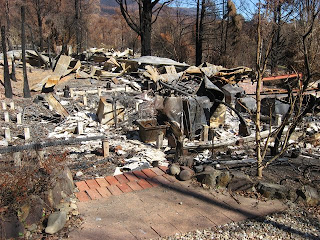 In the afternoon, as Jill, Peter and Kath sifted through the house ashes, I went for a walk with J and L. 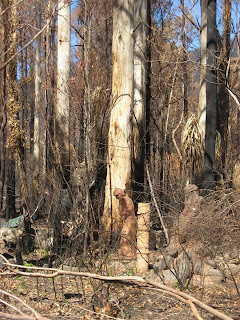 Carefully crossing the river by trees or stones, we wandered across Gallipoli Park. J got across on a fallen tree first (as the bridge was burnt) and called out that she could see some of Bruno's sculptures! Sure enough, it looks like a number of the inhabitants of Bruno's Art & Sculpture Garden had survived the flames, even while the plants around them burnt. 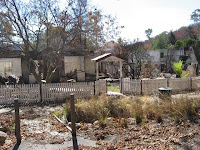 Similarly, elsewhere a few things survived - the swings opposite the Lolly Shop, signposts - while all else was gone.

The occasional building also survived - the untouched Marysville Bakery, The Tower Motel unattractive as ever and the gorgeous Crossways Historic Inn, saved with a bucket by its courageous owner. We were unaware that a party had taken place a little earlier (hinted at by the pile of cupcakes in Crossways). Other places, such as Kerami Guest House and Mary-Lyn were completely gone (apart from the liftwell of the latter, which still stood). 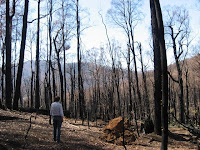 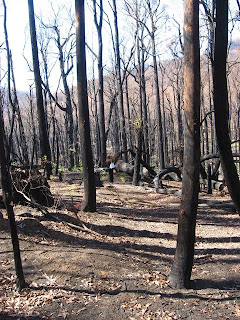 Here are some pictures of the forest, and below are a few comparisons to happier times, including some pictures I previously blogged taken at roughly the same location.

There are some small signs of life returning - a few treefern fronds unravelling here, a bit of lawn there, some green trees in the main street, even some shoots on tall trees in the forest, but sadly not many.

While birdsong is usually everywhere at Marysville, there was virtually none to be heard. A few hungry currawongs lurked by the bakery. In the garden, there were a few skinks, butterflies, dragonflies, even the odd grasshopper, and the buzz of bushflies, but of the wombat - who would normally be tempted by the lawn - there was no sign. 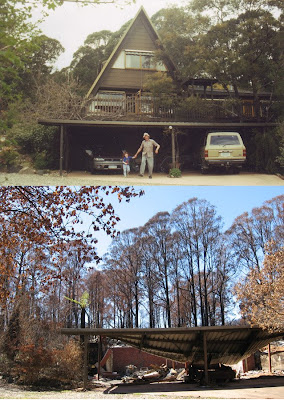 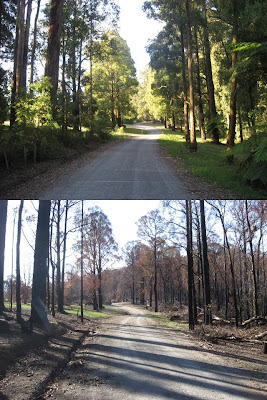 Comments:
There was so much devastation, but good to know that there are some signs of life returning. Fires make way for new, healthy growth. Horrible, though, all the losses that come with them!

So Glenda's house is gone ... I've seen the before and after pictures :-(
Is she already back from holiday or did she see the pictures ? Please tell her that I feel sorry too.