The Day of the Tiger 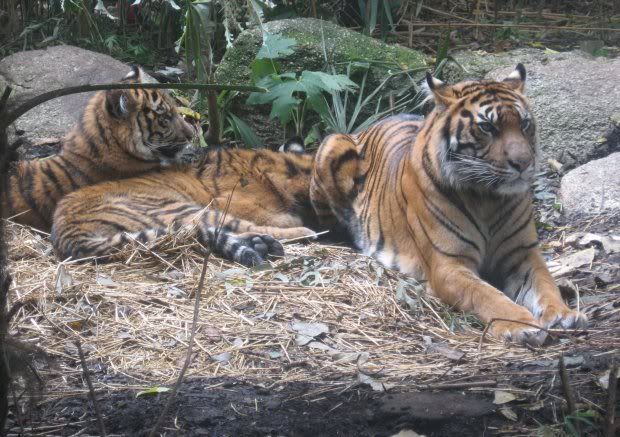 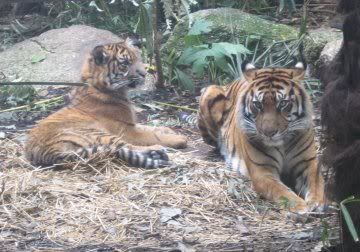 The last Sunday in September is designated World Tiger Day. Here's a magnificent animal that really shouldn't need the publicity but, sadly, now needs it desperately.

These are Sumatran tigers, photographed by Jill when we went to Melbourne Zoo back in July. The population there now is five, with the birth of three cubs late last year. I had planned to put up J and L's drawings from the same day (and may yet put them here if they turn up).

The Sumatran tiger subspecies is well on the way to diverging into a full species, but with a surviving population estimated at 400, it is critically endangered. The usual pathetic reasons - habitat destruction, deforestation and fragmentation of populations, hunting/poaching for the production of (ineffective) medicines - are the main threats.

The risk of extinction is very real, given the recent extinctions of the Bali tiger (1937), the Javan tiger (1980s) and the Caspian tiger (late 1960s), with the South China tiger soon to follow (allegedly 50-60 still exist in captivity only). All currently existing tiger subspecies are Critically Endangered.

There are many tiger conservation organisations out there. If you want to help and can't decide where to donate, the World Wildlife Fund is always a good place to start (we're members).
See: WWF Tigers