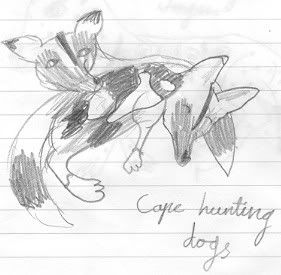 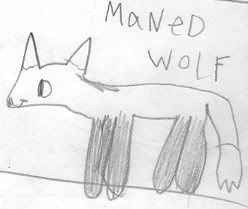 We had a lovely day for our trip to the Melbourne Zoo. The burgeoning throng of school holiday crowds thinned through the day. J. and L. took sketchbooks and drew lots of wonderful pictures of all kinds of animals, so I've included some here (Binturong, Cape Hunting Dogs & Ostrich cartoon by J - Bobcat, Red Pandas & Maned Wolf by L).

There were the usual multitudes of uninformed comments along the lines of: "It's a rat," "It's a big rat!" to "It's like a weasel" (the red panda) and the eternal "It's a hyena like in The Lion King" (the African hunting dogs). 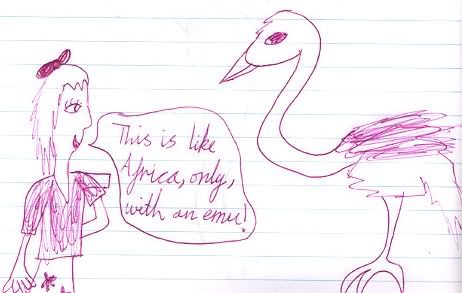 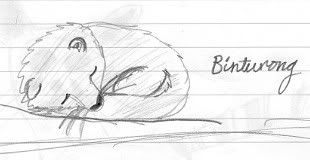 Today's most inventive offender was a teenage girl at the African savannah exhibit (which had giraffes, zebras, ostriches and guinea-fowl): "It's like Africa, only with an emu!" and "Look, baby emus!" (pointing at flock of guinea-fowl).

I'm perpetually astounded at people's non-knowledge of the most basic forms of animals. It's no wonder we've proved unable to conserve even the most wonderful and awe-inspiring beasts if the average punter can only classify them as "rats" or "birds" in the most basic way. 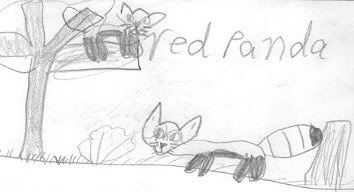 The red pandas were the most fascinating and active I've ever seen them - on the ground and in the trees, even approaching the crowd - but one girl repeatedly insisted to her friend that her cat was much cuter. (Sigh!)