A week ago we drove up to pick J up from a School camp and took the opportunity to visit the wonderful Dromkeen Museum collection of children's book illustration at Riddell's Creek. I'd been planning to do this for a while, partly as it was an opportunity to try to further research a particular Australian children's writer/illustrator who I am planning to try to write an article about. Funny, Riddells Creek was where Reverie was edited, but I hadn't been back there since then. 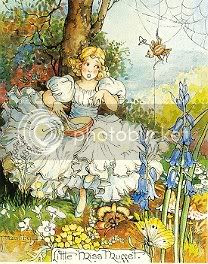 We were very fortunate on the day, and got to have a good look at a lot of the beautiful original children's book illustrations housed in the Dromkeen archives. This particular picture is by late local Peg Maltby, one of Australia's famous fairy painters from the classic local period early last century, and this original is still stunningly bright and clean: it looked as though it were painted yesterday! Jill has a very beaten up old copy of the original Peg's Fairy Book from 1946, and Maltby was commissioned to again paint these illustrations in the late '70s for a new edition (I recently managed to find a copy to give Jill for Christmas... ssssh!)

I know I said this last week (with regard to Ron Embleton), but even the finest of reproductions fail to capture the clarity of detail and brightness of colour of original artwork by the best illustrators. Viewed side-by-side, as at Dromkeen, the array of different illustration techniques was dazzling, particularly across a wide range of time periods. There was one recent book where the pictures were made of sown felt. Jeannie Baker's extraordinary three dimensional collage/dioramas are always worth a detailed look, and I enjoyed seeing some original line and wash work by the delightful Bob Graham.

Taking an entirely original approach to creating your children's book visions is a good way to go and more likely at attract the interest of editors. Patricia Mullins produces her work out of cut and torn tissue paper, sometimes with painted textures, and all glued down very carefully. Again, the colours on the original are gorgeous (this one is also quite large). I enquired about whether she had problems with lightfastness, and whether the tissue paper colours would fade quickly, but apparently Mullins uses imported Japanese tissue papers that use high quality pigments.

As for the author/illustrator I'm researching... a cursory search by the very helpful staff member who showed us around revealed two of her books that I hadn't seen before - fantastic!

Comments:
This is a great post! All three illustrators are exquisite (I have the Fairy Book)

Thanks, Anonymous! What's wonderful is the diversity of visual "voices" shown with just these three artists. One of the things I dislike about computer-based art (in addition to the failure to produce beautiful, complete originals), is that it tends to drive most artists in similar directions.

Which version of Peg's Fairy Book do you own?

Hahhaaaaa, I just had to find and open a packed box (have had things packed for twelve months because keep being told we have to move house - will be in March finally) AND it is Cicely Mary Barker's Complete Book of Flower Fairies! The reason I thought it was Peg's is because infant's school teacher Great Aunt had copies of all the fairy books that existed and we lived in Fairy Land when she was around - I recognised ‘Little Miss Muffet’. Cicely's Book was given to me to commemorate Great Aunt’s death one year - her book collection was snapped up by a Wicked Brother :)

Jill will have a magical Christmas!

Thanks, Anonymous - the confusion with Cicely Mary Barker is understandable, given that she comes from a similar time period and painted similar things. I just had a look in J's room and there is a big CMB poster on the wall, featuring various Flower Fairies.

The Peg Maltby picture I put up here isn't typical at all - I chose it because it was one we saw the original of at Dromkeen.

As for relatives that manage to clear out all the best stuff from an estate within nanoseconds - grrr...

In about 1988 I taught at Olinda PS and a visiting artist noticed 2 Peg Maltby drawings we had on display. He showed good interest and we had it confirmed that they were originals, one in very good condition and one a bit faded after years in a sunny room. One was of a koala and friends on a gum tree and the other a fairy scene. Peg had lived nearby and had a relation (grandchild?) at the school and was known to visit the school and draw on the chalkboard. Eventually we decided to permanently "lend" the pieces to Dromkeen. We had a visit one day and formally passed them over to be cared for and for all to see. Maybe you saw them! The school had professional copies made to remain hanging at school.I loved the koala one and also managed to have a coloured print made before they left for Dromkeen. Hope this is interesting and still finds you after the last comment in 2005.

Thanks for your comment! It's wonderful to hear the history of the Olinda pictures and how they found their way to Dromkeen. I distinctly remember seeing the Peg Maltby that I've included here (the colours were very bright), but koalas also sound vaguely familiar. Good work on retaining copies at Olinda PS, and keeping the historical connection there as well!