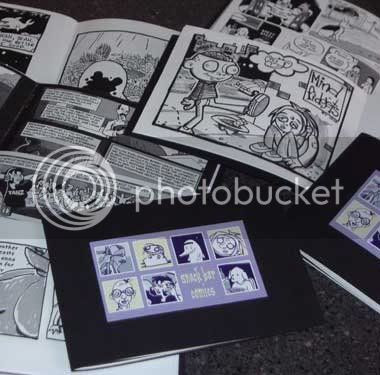 An ingenious new concept, the Snack Bar Art Space, is a new project using vending machines to distribute artworks in the inner city of Melbourne.

Tonia Walden has put together a nifty little minicomic, featuring a bunch of great local comics artists. Some of the work has appeared previously in other publications, but my piece(s) in there haven't - it's a great collection in any case. The artworks in the Snack Bar project (including the comic) will be contained in small labelled cardboard boxes, available at $2 each.

The first vending machine will be located in the Brunswick Coin Laundry at 326 Victoria Street, Brunswick. If you're over that way, please grab a copy before they're all gone! The launch is on Wednesday night, 6-8pm (I won't be there though). 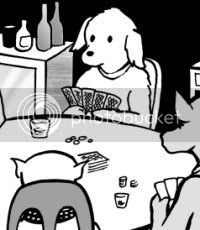 The main piece I have in there is a one pager in landscape format, Dogs That Know When Their Owners Are Coming Home. Yep, that's right, it's a sendup of Rupert Sheldrake's goodhearted but pseudoscientific book of the same name, and also C. M. Coolidge's (now classic) cheesy dog pictures from the 1920s.

Comments:
I love dog cartoons. I even have a T-shirt printed with the David Sipress cartoon in which a smoking dog and its owner are looking into a cafe window which has No Dogs and No Smoking signs. The caption voices the man's words to the dog: 'I don't think this place is going to work for you, Theodore.'

Thanks, Joe and Alina!

Joe, I wasn't familiar with David Sipress (by name), but he has a classic The New Yorker look to his cartoons! There's a huge new book coming out showcasing the cartoons and comics from The New Yorker with a complete CD of all the cartoons included as well!

I tend to think of dog cartoons really getting started with James Thurber, though it's definitely not the case (and the C. M. Coolidge paintings date from a similar era in any case).

Joe, if you're a dog owner, you might enjoy the late Eric Gurney's How to Live With a Neurotic Dog - text and cartoons (from a while ago).

My own dog characters date back to the very first comics I ever drew (about Grade 5), with my best known one being the nameless terrier from Busker Jim, a strip that ran in a City newspaper for a few years in the early '80s.

I do have dogs and I used to little drawings of them on the notes I used to leave for my wife (of the Gone Shopping, Back Later type). She kept them all and unbeknownst to me, blew them up, coloured them and made them into a book which she presented to me for my birthday one year!

Joe, I didn't know you drew - that's wonderful about your wife collating your pics!

I try to keep Jill's pictures, which she similarly draws on notes and things, and I love the way she draws the children in particular. Honestly, I reckon she could be a children's illustrator, but for some reason she doesn't seem compelled to draw in any organised sort of way.