Sea for IF / Melbourne Aquarium 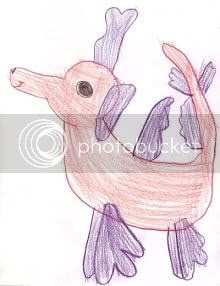 On Thursday, we went to the Melbourne Aquarium, which we’d been meaning to do for a while. The children took sketchbooks, so I thought their pictures would work nicely for the “Sea” theme of Illustration Friday this week.

J’s pics shown here are the Humboldt Squid, and some stripy fish (one of which is called “Old Wife”), and L’s are the Leafy Sea Dragon, Port Jackson Shark, Grey Nurse Shark and Turtle.

As we were queueing up to go in, there were videos playing showing various sharks and sea creatures, which we discussed. It was interesting to see the skeleton of a dolphin, with residual tiny bones indicating the place where back legs existed in their ancestors. 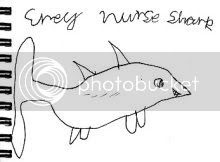 There was a height chart for kids to measure themselves against the length of various sharks from the aquarium, from the really little ones (Port Jacksons and banjo sharks), up to the largest held, the grey nurse sharks. L wanted to know if grey nurse sharks were dangerous (they certainly look dangerous). I told her how people had thought they were, and had wiped grey nurse sharks out locally and driven them to near extinction everywhere else, with only a few hundred surviving here and there further North. This amused the guy queued in front of us, who was apparently still of the opinion that the only good shark is a dead shark, and said as much to his girlfriend. 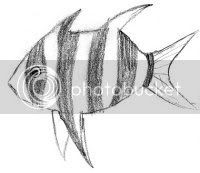 With it being the School holidays, the crowds were pretty full on, even though we got there early. The first section of tanks was very crowded, but I knew it was worth making an effort to look carefully through this section, as a lot of the most fascinating creatures would be there. I have fond memories of going to the aquarium in Sorrento years ago - my favourite was the Cuttlefish, and there were some fine cuttlefish right here in the second tank. They’re wonderful to watch, with their ability to change colour, their strange alien eyes, and their curiosity (they're reputed to be as intelligent as a cat). They came up to the glass and put their tentacles against it, looking as though they were expecting to be fed. Also, in this section were corals, anemones, eels, seahorses, sea dragons and an amazing array of sea fish. 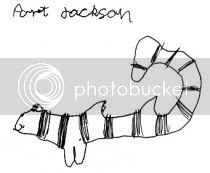 The next level up had a good range of freshwater life, followed by a rock pool tank where children could handle some animals, and a deeper mangrove tank containing lots of friendly rays and small sharks of various sorts. 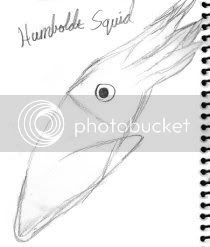 Going back down, we got to a section with lots of tanks of assorted sea jellies (jellyfish), some deep water creatures, and the current star exhibit – a frozen Giant Squid, looking suitably impressive. J drew the picture from a video of smaller Humboldt squid shown in this section.

Arriving on the bottom level was a bit of relief, as the crowd had room to disperse a bit inside the Main Oceanarium (making it better for sketching). The enormous tank here goes above the walkways, so sharks, rays, fish and turtles are actually swimming above your heads. We were there in time to sit and see divers feeding the animals in the tank, and a girl gave a talk about them, mostly focusing on the history and plight of the grey nurse shark (along the lines of what I’d told L earlier - I wonder if that guy stuck around for it :)).

Lastly, there was a simulator ride (which oddly seemed to be set in an ice station, and had nothing to do with the sea) and a shop with all kinds of aquarium related toys. I think the key to getting the most out of the Melbourne Aquarium is to spend plenty of time at each individual tank, looking closely at the wide variety of creatures – it's well worth visiting!

Comments:
I love the array of family sea creatures :) You are enjoying the school holidays!

so lovely sketches of sea creatures. it was like i was reading a book. i love going to big aquarium museum, too!

What a fun outing! I used to lovedoing things like thatwith my son. Your children really put together a great group of fish sketches! I ove that they labeled them:> It appears that talent runs in the family!

What a great collection, and a great read. Thank you.

What a great idea to showcase your kid's work - guess they're all a bit of a "chip off the old block" when it comes to drawing talent. Thanks forsharing!

I think J and L have gotten a bit socialised into drawing as a normal part of life, by me spending so much time doing it :). When we go out I don't tend to take a sketchbook, as I don't want them to feel that I'm competing with them in any way, but I do draw in their sketchbooks if they ask me to.

Sadly, the poor old Grey Nurse Shark is still being slandered, with old myths being perpetuated. Following a particularly nasty shark attack (and death) on the weekend The Age, followed up with a discussion of recent shark attacks -

- including the following "The grey nurse shark, which is considered dangerous if provoked, is said to be common in waters where the woman was attacked." This sounds like a quote from an old book, dating from the time when grey nurses were widely and wrongly blamed for the attacks of bull sharks (extremely dangerous and still common). The following day there was a lot of mention of bull sharks and (thankfully) no further mention of the critically endangered, and harmless, grey nurse shark.