Publisher's Weekly reports that Drawn & Quarterly will be publishing all of Tove Jansson's Moomin newspaper strips in English for the first time! I can't wait to get hold of these! What is unclear is whether the books will be only the strips by Tove herself, or also include those by her brother, Lars. Either way, they're essential! The Moomin books have been read aloud at our house repeatedly (they work wonderfully well this way) and Jansson was definitely an influence on my early drawing style. I've also collected a number of sets of Moomin figures that the children enjoy playing with. Thanks to Greg G for the heads up on this one! The following strip is shades of Lost! :) 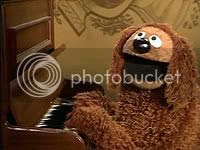 Lately we've been enjoying the first series of The Muppet Show on DVD, particularly Rowlf's musical numbers (he remains a favourite character). Introducing The Muppets to J and L has been interesting. They also enjoy Labyrinth, and the "making of" documentary on there is exceptional for showing puppet design and operation at its most masterful. The latest Muppet news (with them having been bought by Disney) remains the upcoming pseudo-reality show, America's Next Muppet mini series, now in development. Illustration Friday this week is "Glamour" - I hope someone will think to draw Miss Piggy!

On a completely different note, Pink Floyd guitarist/singer David Gilmour has a new album coming up, On An Island. This sounds promising indeed! Gilmour's previous two solo efforts are pretty decent albums (as are quite a few other solo PF efforts). And what is it with birds lately (ie: Kate Bush's Aerial)? Who cares, it's apparently a good thing! All this and new Doctor Who as well. I look forward to David Tennant's spin on the Doctor in the same way as I had complete faith that Christopher Eccleston was going to be brilliant (he was). The most recent series reinvented the show really well, while managing to retain most of what was important about the original. Currently, J and I are sitting through the repeats of all the earlier series (nearing the end now). For some weird reason this run has skipped nearly all the Dalek episodes (to do with licensing issues at the time of purchase?). It's hard to know when Doctor Who jumps the shark in those early series: I used to think it was when Romana 2 and K9 left, but Peter Davison was so much better than I remember! Colin Baker's episodes were blighted by nasty scripting, repellant characterisation and a weird format, but Sylvester McCoy makes rather a good Doctor, even if the scripts are still a lot more unpleasant than they need to be.

Comments:
Apparently, the Nation estate were upset at the original plans for the Daleks in the new series, and pulled all rerun rights.

From my own view of the new series, what Davies had planned must have been pretty frickin' bad given what they eventually did show.

But that's just me.

Thanks, Greg! Yeah, I think that dispute sounds familiar, but the Nation estate must have relented, because the Daleks turned up in the new series - it's just a pity they couldn't have then released the earlier Dalek episodes. I saw most of them as a video (not DVD) box set in the ABC Shop recently.

In the new series, I thought the Dalek episode was excellent - showing respect and having real pathos - but I was really sorry Davies and Co. then chose to totally undermine it, by later bringing back the reinvented Daleks (especially as any of the usual foes would've done).

Great idea about Miss Piggy...she is so glam! Love the album cover you posted.

Jody, I'd love to do a Miss Piggy Glam Illo but I just can't manage it this week - I'm flat out drawing all manner of things, and couldn't possibly do her justice!

I can see your point, but respectfully disagree. This is what I wrote at the time:
http://mythopoeia.blogspot.com/2005/06/one-day-i-shall-come-back-yes-i-shall.html

But, I should learn to let go. Besides, Moomintrolls!

Huge Moomin Family fan who was also influenced by Jansson!