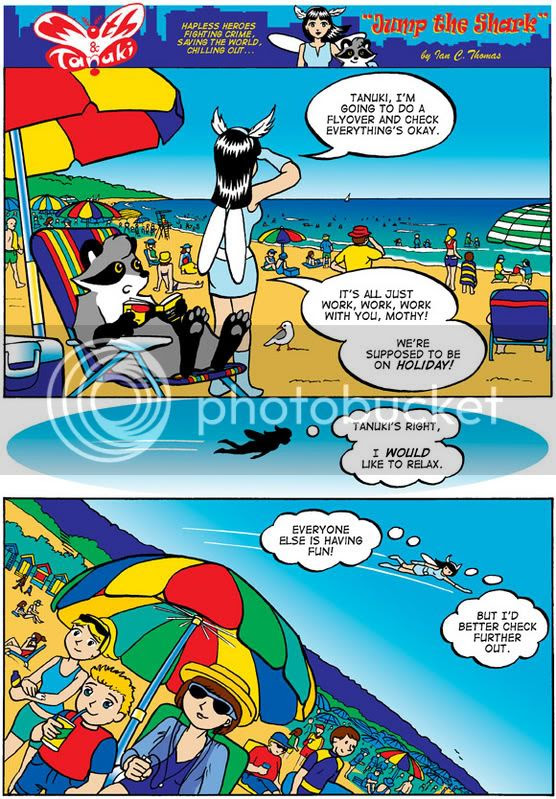 The May 2007 issue of Mania, #72 is out now. Moth & Tanuki are up to their fifth issue appearing in this magazine (and their seventh episode).

This time I thought I'd post a whole page as a teaser. This is an episode I drew over Summer, when it was still hot (and actually before the shark scare at Phillip Island). I had worried about the timing with going to press, but global warming has ensured that it's still unseasoningly hot and beachy right now.

Tanuki puts in an appearance on the cover, with a bit of recaptioning (which made me LOL when I noticed it). The cover has a lot happening - click on the pic if you want to see a larger version.

OzTaku also did a bit of creative M&T recaptioning in #1.3 (in the previews for next issue). There was a thread on a forum a few years ago where people started doing this with a pencilled M&T page I'd posted - they do seem to lend themselves to it. Maybe I should post an uncaptioned page here some time :). 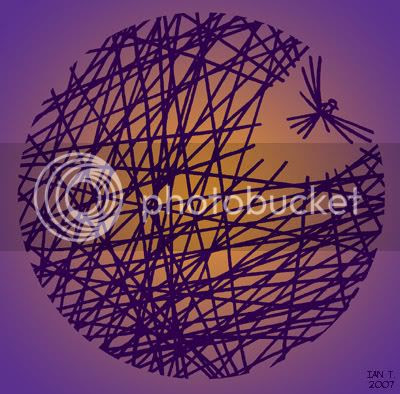 Something a bit geometric. I'm not quite sure why this image popped into my head. This Illustration Friday topic doesn't speak to me in any direct way, but this does express an aspect of what I feel about it. 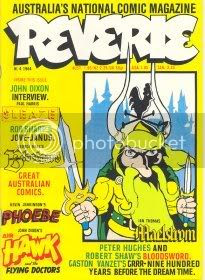 The other day I was cleaning out stuff at my mother's house and found a copy of the first issue of Reverie. Kevin Patrick has written an excellent piece on this early Australian anthology comic - Reverie Remembered - originally written for Collectormania magazine. Thanks for the memories, Kev! I was happy to be a part of this widely distributed (but all too often overlooked) Australian comic of the early '80s. Gary Dellar did amazing things getting a disparate body of work neatly gathered in an ongoing anthology. His commitment was amazing, even to setting up his own press to print the later issues. This cover (featuring Maelstrom) is the one I did for no. 4. Kevin Patrick writes it up better than I could, so I highly recommend his review!