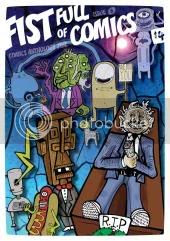 The final issue of Fist Full of Comics volume 2 is out now, and I'm happy to have had work in all six issues of this revived Australian comics anthology. We need more books like this, for new comics artists to see their work in print and for established artists to feel free to play around freely with the form.

Feeling short of inspiration I went to my old lyrics book and found a short piece, "Coelacanth," from years ago, that adapted easily. As Owen (the editor) pointed out, the words and pictures complement each other and form a complete whole, unlike many poem comics, which merely illustrate the words. It's definitely my best effort in this form, although it was nice to have begun the tradition of poem comics appearing in the centre pages of FFoC. I had fun with this one, which is what comic making really should be about.

The theme for Tango9: Love & War certainly appears to have inspired, bringing out the best in Australia's comic writers and artists.

At 352 pages, this is the biggest Tango issue yet, and it has continued to become more book-like, now sporting a full colour cover and even bearing an ISBN (I wish more Australian anthologies would to this!).

My own 3 page piece, set (without specific mention) during the American Civil War, was difficult. This was a hard story to conceive, but even harder to work on. It was pleasing to hear Bernard mention in his speech at the double launch that other contributors were moved by the works they created, often struggling with deeply felt material (and it shows).

The story I chose to draw, "Nowhere to Hide," deals with the role of animals in war, surely a thankless task for even the most devoted among them, but often just resulting in extreme waste of life (but then war has always been about that). It also deals with the attitudes different people have to war itself.

For a while now, horses have been on my mind, so this story just told itself without much effort. While I researched it pretty thoroughly, I removed most specific references to keep the feel more general. I also (with Bernard's editorial encouragement) removed some wording, and probably should have removed more :).

While I don't like to single out favourites, some that struck me and have stayed with me (difficult among so much material) were Owen Heitmann's nuanced "Letter from home," Chris Downes' apparent true story "A Simple Act of Preservation" and Jessica and Grug's beautifully realised cartoon fantasy "Ellewin & Arlbard." I found myself returning repeatedly to the book, to discover new gems and revisit favourites.

It's a mighty book and highly recommended (for mature readers), both as a snapshot of Australian comics right now, but also as a classic anthology

The Tango Collection and Tango9 launched

Last night, The Tango Collection and Tango9: Love and War were both officially launched.

The turnout was remarkable, with quite a crowd braving the rain to huddle in the heat upstairs at Dante's in Fitzroy. The walls carried self-portraits and biographies of the contributing artists, so it was fun catching the backstory on people you found yourself chatting to (perhaps less so if they'd read yours :)). These are also included in the Collection.

Spendidly attired in white suit and panama hat, Tango editor Bernard Caleo gave an amazing and very entertaining heartfelt speech discussing the genesis of each book and thanking the many people involved in the creation and production of each. I'll discuss Tango9 in another post.

The Tango Collection strikes me as amazingly well-timed, and quite visionary on the part of Allen & Unwin. A number of local comic creators have had graphic novels published in recent years and many of them have short pieces in this compilation.

It's a big, thick book packed with so many of my favourite pieces from the series and exactly everything that a good comics anthology should be - this book is able to present such a fine collection by having ten years of fine material to select from. Great credit is due to Bernard Caleo, along with Erica Wagner and Elise Jones, for this care in selection.

The "Backword" explains in comic form Bernard’s original vision: he began the regular Tango comics anthology in 1997 as a forum for comic makers to have a go, with romance and all its meanings as the broad theme. With the emphasis on strong black-and-white art, these eclectic pieces have an immediacy and eloquence lacking in most mainstream comics, and are mostly aimed at a mature audience. As Dylan Horrocks says in his intuitive introduction (regarding why we do this), these are "small, secret stories that will slowly creep into your mind and haunt your dreams."

My piece in there is my one pager from last years "Love and Food," which was the only thing I drew last year, so it's heartening to find it at the beginning of this book. Maybe I should do more wordless pieces :).

This is a special and fun book, and one I hope that you will consider when buying presents!

The Tango Collection and Tango9 launches are tomorrow!

For more information about both new books see:

I am very sad to hear that the great Eric Woolfson has died. He will remain one of the greatest songwriters of all time - a wonderful person and artist still active making lasting music - a terrible loss.

(From the recent album Eric Woolfson Sings The Alan Parsons Project That Never Was).