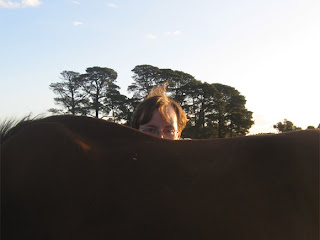 Apparently, it's okay to make fun of people with red hair in the media - evidenced in VicRoads new anti-"gingers" campaign - as if anyone needs a further excuse to perpetuate this particular form of discrimination.

I found growing up being a redhead difficult in many ways, experiencing what I can only describe as a form of racism, from the widest imaginable variety of people. Maybe it's not covered by legislation (in the same way discriminating against or humiliating someone for having blue eyes wouldn't be), but I'm personally proud of this part of my Celtic heritage, and I don't see how it is okay to treat a genetic physical characteristic of a particular group of people in this way.

I like to think we're beyond this kind of discrimination in this country, particularly as three of my daughters also have red hair, but apparently not - Australia remains an inherently racist nation, if our advertisers are to be believed.

As I don't seem to be getting much chance to draw comics lately, I was delighted when Dillon Naylor offered me a chance to work over one of his "Camilla and Mike!" episodes for Challenge: Australia's National Students' Magazine.

These roving kid journalist characters are regulars in this school magazine, exploring different subjects in an informative and entertaining way in comics form. The challenge was to draw Mike and Camilla in a manga/anime style suitable to his episode, without overly compromising their usual identity.

This two pager was a very enjoyable piece to draw and is now appearing in issue number 1 for 2010 of Challenge, available through most schools or iSUBSCiBE.

Lately, a lot of old short animations have been appearing on DVD locally here in Australia, including some nice Disney collections. I just picked up an excellent Warner Brothers compilation for $9.95 in the sale at Video Ezy. This one features many of their classics, but best of all "One Froggy Evening"! The DVD title is Looney Tunes All Stars, volume 3 and it has a fairly misleading cover - it's less of their usual characters and more of their other best shorts - but at that price, I highly recommend it!