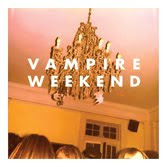 Last night's Vampire Weekend show at Festival Hall was fantastic. Making full use of almost every song from their two albums, this was a tight and solid lineup in full flight - I was amazed at the tempo they maintained and just how much these songs rocked live. 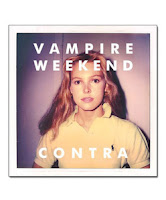 I know a lot of people have compared their sound to Paul Simon's "Graceland" but I don't hear that particularly - the melodic guitar fills and deft keyboard orchestrations are pulling the sound in some other, more Summery, direction. The props were minimal and based on the covers of the two albums, but aspects of the sound and approach deployed by this accomplished four piece for me recalled the artrock of Talking Heads (who I saw on the "Speaking in Tongues" tour many years ago) - which isn't say they sounded like them, just something in the confidence and consistency of the performance.

I have to mention the support band Cloud Control, who were really impressive. Again, a solid four-on-the-floor lineup that really knew how to play together, drawing most of their energy from the male/female vocal harmonies and tight rhythm section, supported by the vocalists' keys and guitars. There was something in their sound that put a pleasant involuntary shiver up my spine - which is high praise and something I haven't experienced in a live band in many a long year. They opened by pointing out that The Beatles once played this very venue!

At least three of their songs were familiar to me from Triple J (pretty much the only station I listen to these days). I find it sad that a lot of people my age aren't interested in new music - I mean, I value the old stuff, but I wouldn't want to never hear anything else!

Festival Hall was exactly as I remembered - a fairly intimate venue with terrible seats and boomy acoustics, but visibility is okay as long as people don't stand on their seats. It's almost a few decades since I was last there, but it's unchanged. Oh, and the kids in the row in front of us were wasted - I don't know what on!

I had been complaining when Vampire Weekend were here last time that they didn't play any underage shows, but this show at Festival Hall made them available to more of their very appreciative audience. A great set of strong songs from a band with wit and considerable musical chops!

Another review of the same show.