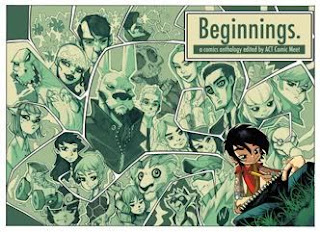 The fantastic all colour, nearly 200 page Australian comics anthology, Beginnings, has just been released. It's a limited edition, so you'll need to hurry - order at: Beginnings shop.

This amazing cover design is by Jon Sommariva - I love his interpretations of all the characters, particularly mine (you can figure out who those are by buying a copy :) ). The book came about as a result of the ACT Comic Meet. I've appeared in other books with some of these fine artists, so when this anthology was first announced I knew it would be something special, and was keen to be involved.

My contribution is a 7 page story called "Paradise." I had a few ideas - the origin story of a Moth & Tanuki character, the first eight pages of a children's comic project I've started on, or the first chapter of one of the graphic novels on my neglected script slush pile - after running these ideas past Jill, I was surprised to find which one seemed the best choice. 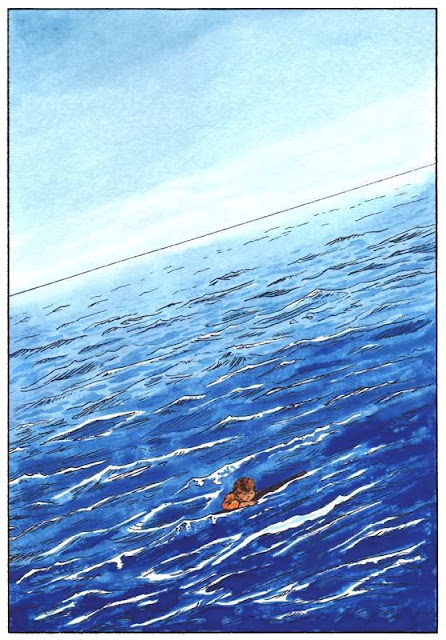 While I'd had the character designs for a while I wasn't sure where to begin. Somehow pencilled sketches seemed to best capture these characters. I gave L. the first draft of scribbles to see what she thought and even like that, it seemed to work as a story in its own right.


For a while now I've been feeling disillusioned with computer art. There's a sameness to it that bothers me - a homogenising effect - that makes it seem like microwave food a lot of the time. Also, my eyes have usually had enough of staring at a screen after work.

I was also feeling tired of working with pens and thought they weren't right for this. The hottest days of Summer didn't seem like the logical time to be refilling them either (I have some work stored up for inking when the weather cools down).

After doing some large, fairly tightly pencilled pages, I experimented with "hardening" the linework on the computer and then printing it out onto watercolour paper. That puts a bit of a break in the organic process I'd wanted, but the results were just right! I broke out the watercolour paints and worked on all the pages at once. Brushes really are the most enjoyable tool to work with, and colouring this way was much faster than using Photoshop.

After I sent my submission in (pleading that it start on a right hand page), I received a request for a splash page. The picture at left was sketched hastily in pencil in my morning tea break and then painted that night. The only problem was scanning it while the paint was still damp.

While I'm on it, my comic stories are paced and designed to work according to the page turns, and placement of the pages at right and left is vital. I've had stories in the past ruined by them starting on the left instead of the right (it can also ruin the ending). With this book I didn't need to worry: the ACT Comic Meet is a collective of talented artists and this book has been put together by the editors with real care and attention to detail.

I've really enjoyed this project and look forward to seeing the finished book - if you're quick, you might even land a copy before me!