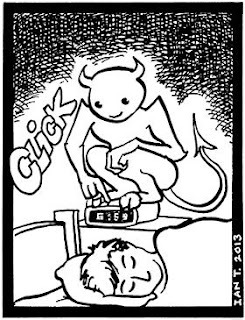 This is the first panel of a one page comic piece published in the literary anthology, Short & Twisted 2014. It's one of many pieces that I've had scripted for a while, which I completed with this fine book series in mind.

The book's emphasis is on short prose works with startingly surprising twists. I seem to be having better luck with getting pieces published in literary anthologies than in comics lately - I wonder what that means? Maybe my work is becoming too obscure. Anyway, in a year where a number of pieces failed to reach publication, it was pleasing to get this one out there.

My big project now is still trying to compile some sort of anthology of my past work, but that's a massive task.

Many of the pieces need care with scanning and cleaning up, and the selection process isn't easy, given that my emphasis has generally been on longer tales. I think a book like that would need to contain selections from Maelstrom, Children of the Moon, Moth & Tanuki, etc., along with strips like Busker Jim and Joytown, and shorter pieces. More than half the material would need to be in colour, which is an added complication. I may yet do a shorter black-and-white book focusing on more recent, one off, pieces like this one.

In the meantime, if you like good literary anthologies, Short & Twisted 2014 can be purchased here.