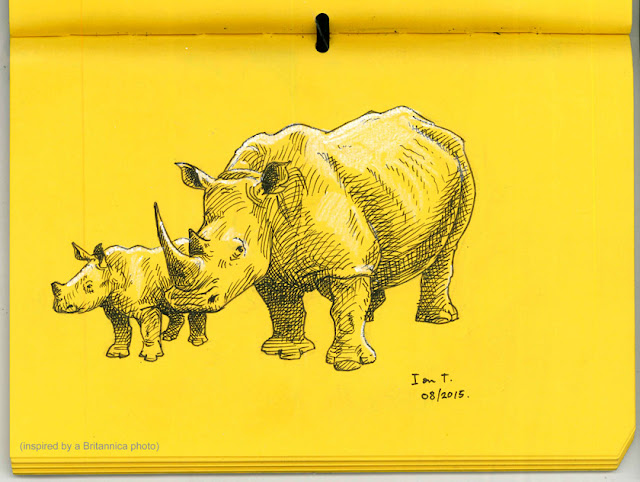 After drawing two white rhinos in my D&AD yellow sketchbook, I realised that they worked as a picture for the subject of this week's Illustration Friday, which is "Pointy."

I wanted to make some use of the yellow paper as a medium tone, so these were drawn with black markers and a white pencil.  I used a screen picture in Britannica as my reference. 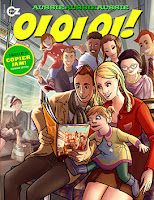 The latest issue of the fine Australian anthology comic Oi, Oi, Oi! is now available in the ComicOz Shop, I'm guessing for a limited time (as some previous issues have sold out). Better yet is the deal on a 4 issue subscription!

As I've mentioned here before, I'm a fan of Australian bush impressionist painter, Frederick McCubbin (and The Heidelberg School in general), so my three page piece is a tribute to his wonderfully evocative triptych, The Pioneer.

Something that occurred to me about this set of paintings, is that it really should be called "The Pioneers" - hence the title of my comic piece. 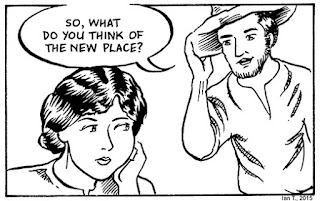 In a sense, this triptych has always seemed to me like a big, wordless, comic format story, told in only three panels, and I have heard various interpretations of it over the years. My piece was originally conceived as an outright comic pastiche, but the style became more formal as it progressed. I also wanted to test myself with adapting a painterly piece into pure black-and-white linework, and for added difficulty I thought an impressionist painting was a good place to start with this.


Of course, my story does show what happens when I take my smutty little mind to The Art Gallery, but I think it also says something I wanted to about plain old long-term relationships and the passage of life. If you want to see my other Frederick McCubbin adaptation, that can be found on this Blog, see: Lost.