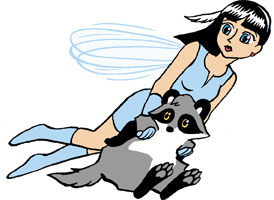 One of the ironies about Blogging is that the more that is happening in life, the less likely you are to blog about it. Personally, I try to maintain this blog with the full knowledge of it being public (particularly as some people I don't like read it), primarily as a place to log artwork progress. As there hasn't been any this year - I haven't drawn a scratch so far - I haven't wanted to. It's been a crap year so far in so many ways, but I don't plan to blog about it. One thing I have learnt is that going near doctors can really make you ill, both in the short and long-term.

Something else... Last night, as I was walking out from the railway station, I spotted headlights heading straight towards me, and stepped forward just in time to avoid a car, which smashed into a sign right behind me. It had swerved completely off the road, over the footpath and up an embankment, and run through the midst of a group of pedestrians (another guy was also just missed). Immediately it crashed, a girl jumped out - evidently drunk and still with a glass in her hand - and hastily swapped seats with the young guy in the passenger seat, before roaring off round the corner dragging the bumper. They stopped in a carpark to throw the bumper into the car and took off again. It was really close - I felt shocked afterwards, but it all happened very suddenly. I'm not sure why I'm blogging this - maybe I should draw a "comics journal" of this kind of stuff :).

Now, even though Moth & Tanuki ostensibly took early retirement at the end of last year, they're happily putting in an appearance as part of the cycle of characters on the front page of OzTaku ("Refresh" will find them). While OzTaku magazine has ceased (with the second half of a 16 page M&T adventure still unpublished) there is a chance M&T might be anthologised, though I'm not promising.

As far as drawing goes I feel slightly motivated again, so if anyone wants to hire me to draw some comics or illustrate something, now might be a good time to enquire, before I start something else. Lately I feel more drawn towards the purity of straight prose. It's always been a battle between writing and drawing for me, so maybe that's where I'm heading. I have one project I'd thought would be an episodic graphic novel, but maybe it should be a short book.

Comments:
Welcome back. Hope you got over the scare. Things like that can frighten the life out of you.

I missed this post (obviously) and it's probably too late to comment; you won't see it. Still, it was good to hear from you. I hope that you're well now, that things straighten out, and that you're doing something that you enjoy.

Until the next time...

I like your raccoon, it's good you enjoy writing and drawing, few people can do both.

Thanks for your comments, much appreciated!