This is another frame from the same (upcoming) Moth & Tanuki episode as Flavour. It's safe to say this story veers wildly from the sublime to the ridiculous, but I consider there is truth in both humour and tragedy. I am a little concerned this frame gives a lot away, but maybe it needs to be read in context...

In the print version in OzTAKU this will be finished differently - in dotty screentone greys - this computer-toned version was an experiment.

If I'd had time I would have tried drawing Alice in Wonderland's tea party - I'm hoping some other IFers will have tackled that (I never look until after I've posted). The Illustration Friday themes lately have been great! For last week's I would've done a picture inspired by Christina Rossetti's Song. Oh well, some other day :).

This blog has been neglected for a while (as have emails to people), and it's probably not going to improve soon. In general, when I'm offline for long periods it means I'm drawing, drawing, drawing, and that's the case at present, though I'm busy with lots else as well.

J has come back from her bike camp this week extremely badly sunburnt, particularly on her face (2nd, going on 3rd degree, in places). Needless to say we're feeling somewhat let down by her new school, (though in fairness our skin is an unusual case and even normal sunscreening measures aren't enough). In addition the school has repeatedly promised to arrange J's music tuition (and has arranged every other student's), but so has far only made excuses. It's a good school, but we're feeling unimpressed right now.

As they were going to camp, one of mothers commented on how gorgeous J was, and asked me if we'd considered getting her into acting. I made some throwaway remark about how acting was pretty superficial, but then I looked at this woman again and realized she looked kind of familiar... like I'd seen her on TV... hmm.

While J was away, L and I unpacked some of my old marionettes, and she seems pretty interested in them. Puppetry is an ongoing interest of mine but, like music, I can't really get involved with it again without wanting to commit a lot of time.

Due to dayjob commitments I've had to knock back a major paid (and credited) drawing project. I've been feeling pretty unhappy about this, but I do take my daytime work seriously, and now isn't a time I can responsibly take enough time off to draw this job.

Something else bugging me is changed parameters on artwork submissions. There was one competition I entered where the deadline was extended by a month, and the focus shifted from mainly black and white, to mostly colour. I'd already completed (and entered) my piece - in black and white. I was unimpressed with the first five finalists' pictures that I saw (unsurprising, I suppose :)), but the overall field is much stronger, with a couple of really evocative images. Needless to say, only colour pictures made the finals.

Another disappointment, though not unexpected, was getting knocked back from a new comics anthology. My story was the first of two parts and I'd also made clear that I had plans to finish the art from same piece differently to be submitted elsewhere, so I'm happy enough that they chose not to use it. However, the specific parameters - 600dpi greyscale - only appeared on the site after I'd already submitted my pages in 300dpi. There was no acknowledgement of submissions and rejections were done with a bulk/form email. There was also a postponement of submission/rejection process and, given that at least one artist had been asking for an extension and that the editors were adamant this wouldn't happen, I'll be interested to see who's in the final book :). On the plus side, from what I've seen they've gathered some amazing artists, truly among Australia's best.

On my usual whinging about the unprofessionalism of Australian comic anthologies - particularly the way they solicit work, then decide not to publish (I've also had another one of those in the past month) - I'm going to attempt to do something positive in response to one case...

This old Busker Jim sprang to mind for the topic. I was going to scan just the second panel as that could stand alone, but the whole strip makes it clearer. The Busker strip appeared in a Melbourne newspaper, City Extra through 1984 and 1985, so this strip dates from just before I gave up drawing (for 15 or so years).

Probably the strongest element in the strip was the dog character (who I'd had for quite a while before), though all the busking musician characters grew as individuals as it went along. It's all really dated now, but I like the sense of early '80s Melbourne that comes through in this series.

Jill's amused by the way I'm eating my back-catalogue for IF (I didn't think I was using old stuff that often :)). 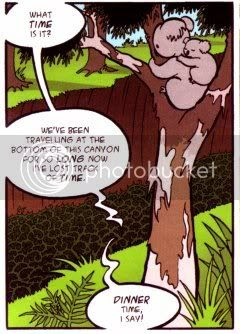 This is a random selection of three panels, showing different aspects of the story. I'm really happy that we're including some clearly Australian elements now - readers can tend to assume that comics they read in local publications are from overseas, so it's nice to remind them occasionally that this isn't necessarily the case. Also, the koalas help to reaffirm the larger scale of the world around the Fairies, as they're so often working on a very small scale (and lately even below ground level). That's important at this stage, as what we're currently working on is at a very small scale indeed! 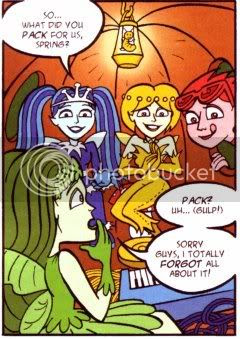 This particular episode is very character (rather than plot) based, in contrast to what comes before and after - the Fairies have such good interplay, they can be put in a wagon to talk and it's still a fun episode! 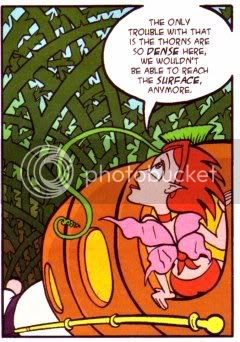 I was particularly happy with how the linework came out in this panel. Something I obsess a lot about is line densities - thick to thin, contrasts, curves, etc. - and the thorns, pumpkin coach and figures in this panel give a good indication of what I try to achieve. I thought about scanning in the black and white version, but I think it's clear enough :).

Go get the latest TG from your (Australian) newsagent or Supermarket now! 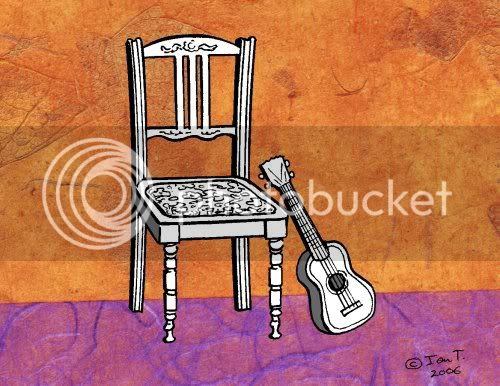 It's looks like the run of esoteric concepts at Illustration Friday has given way to more woody topics - this week, it's "Chair."

Chairs can tell plenty about the human condition, designed as they are to fit the human body in a semi-relaxed (not necessarily ergonomic) position, for people pursuing a range of tasks, or just relaxing. Why electric chairs though? I mean, if you're being executed, is comfort considered to be an issue? Bizarre!

This picture is from part of a cover sketch I was working on for a small independent comics compilation. I got bogged down in the details of the main part of it, but it may still get used. In any case, I have the covers kiss of death, having drawn two others in the last few years, only to have the respective comics cease. I'm actually working on another cover for another comic right now, so fingers crossed...

I digress - there's a certain look I wanted to achieve here - with a fair bit of detail in the linework, but not too much. While working on this, I was reminded of lots of furniture illustrations I did years ago - back in my first marriage - when I was trying to supplement supporting a family on a pathetic salary by going around local printers looking for drawing work. Recently, I've had to knock back a number of paid small drawing jobs due to lack of time - it's frustrating, but a good problem to have, and I'm happy concentrating on my ongoing comics projects (around work and family life).

This is a shoutout to congratulate my mate Dillon on the birth of son, Cyrus, yesterday morning at 8.30am - wonderful news!

I've spent most of the day working on pencils of the Rock 'N' Roll Fairies and Moth & Tanuki, running J and L to and from various schools, and having some interesting discussions with some comics friends about possible projects...