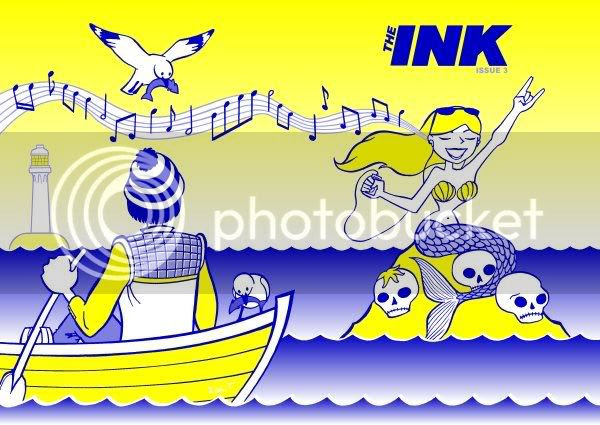 Here it finally is, The Ink #3, with my wraparound cover. Here's the original picture, and below you'll find a photo of the comic itself taken by Tonia Walden, who copublished this issue with me, and who has been absolutely invaluable in seeing it through to fruition (I totally recommend any of her other books as well).

Aaron Burgess of Comics Australia originally compiled the majority of the work in The Ink #3, along with the two previous issues, published under his FlatFly Media imprint, hence there are many conclusions of ongoing tales in here, as well as many fine standalone pieces.
Thanks to all who contributed!

Contributor copies soon (if we have your address, otherwise, please email me). 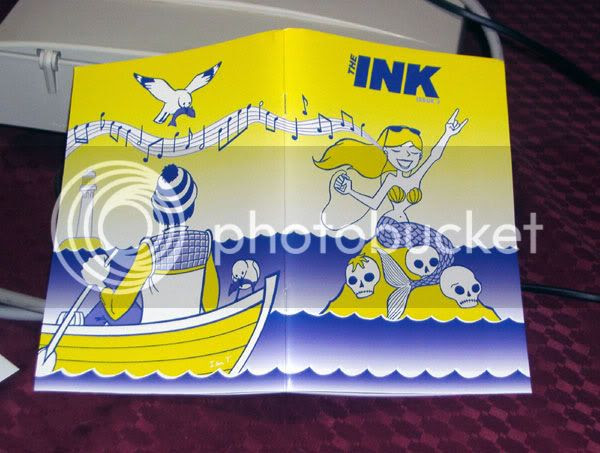 Congratulations to you and Tonia. Was a nice surprise to see it up and on the Pulp Faction boards. Hopefully, you have a nice sense of achievement now that its finished.

A solid list of contributors; I think as strong as the first issue. I felt that, with a few exceptions, issue 2 was weaker than issue 1.

Your work seems to be everywhere at the moment; R & R Fairies, OzTaku, and now The Ink.

Thanks, David! It's funny how it works - I send things out fairly consistently, but it seems to see print in batches, all at once.

I'm really happy with the content in this issue - it's about as varied on the theme of "Music" as is possible. I particularly liked having your well-written prose piece in there: it really tells us something about what music means to you, which is what the book is about.

Congratulations Ian! It turned out wonderfully. :0)

Oh, is it in Australia only?

Little Panda, The Ink is only sold in Australia, but #1 & #2 (and soon #3) are available from Phase Two Comics online.

I love your work - it'd work really well in a good indie comic!

love blue and yellow together like that. i know would have found it hard to fight the urge to combine them to make green, somewhere :)

Thanks, Dillon! Yep, green was tempting, but I worked to totally avoid it, even incidentally, by working with "hard" outlines and no aliasing of any sort.