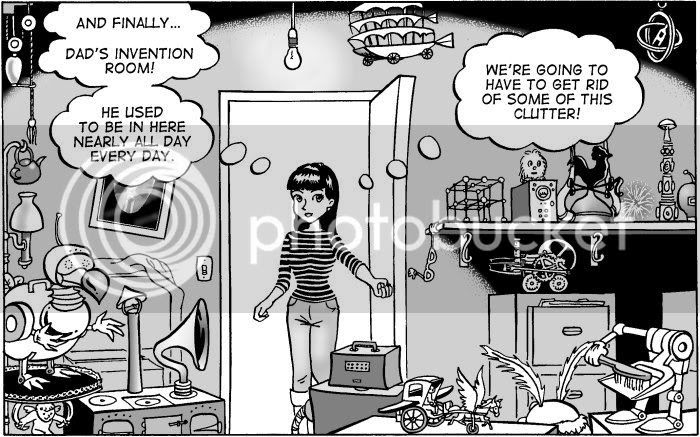 Another relevant panel from Moth & Tanuki - upcoming black-and-white episode 4 - from the same page as the panel used for Illustration Friday "Clean" a little while ago. I would have posted this earlier in the week, but I'm really sick - finally feeling a little better today. 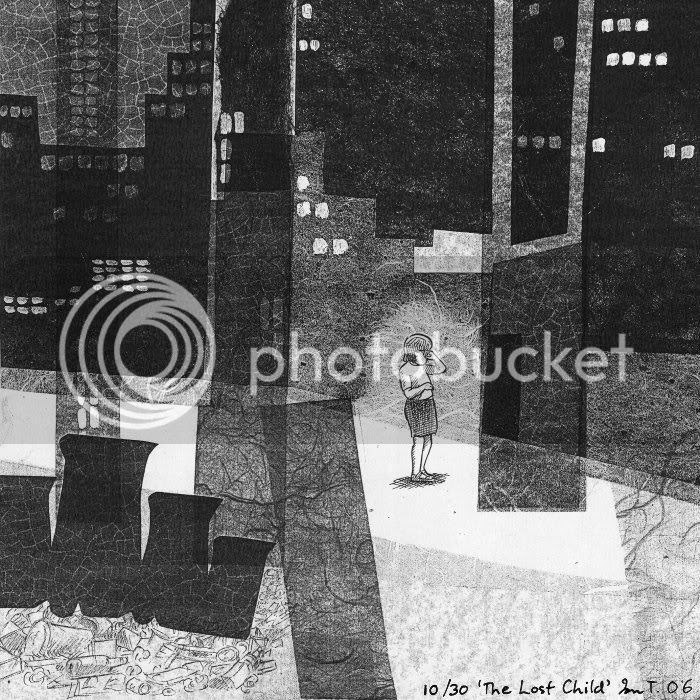 This picture was produced as a limited print for a small artist swap project run earlier this year by Anthony Woodward. My copy arrived in the mail a few days ago and looking through the pictures the different artists produced is fascinating, both in content and technique.

The limited edition is numbered up to 30.

Some day, I might scan the original parts from which this print was produced - it was a time-consuming process to try to achieve the densities of light and dark that I wanted, with a fairly unpredictable process. I made the original pictures using overlays of tissue paper, other textured papers and materials, paint, pencil sketching and an ink line drawing.

To construct the prints from the component originals, the paper was overphotocopied a number of times through the machine, resized onto good quality paper, and each time the images registered a little differently. I stuck to pure black-and-white, so the prints don't have any dottiness to them and do, indeed, look like some sort of lithograph. This scan (using greyscale) doesn't really show what the actual print is like - the black lines and gritty textures are all sharp.

Of course this picture is in tribute to another, as is often the case in Australian art...

An enjoyable and worthwhile print project from Anthony - thanks! Any link updates to home pages or blogs of the contributing artists appreciated. 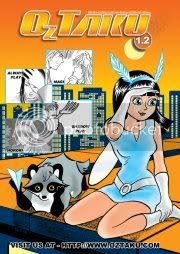 The local edition! Now available in the comics and magazines section of most Australian Borders bookshops and many other fine book and comic stores - fairly complete list!

Recent back issues appear to have sold out with OzTaku themselves. For new readers, I recommend trying to find the new series so far, #1.0 - #1.2. Copies of #1.1 are still available at Phase Two Comics. 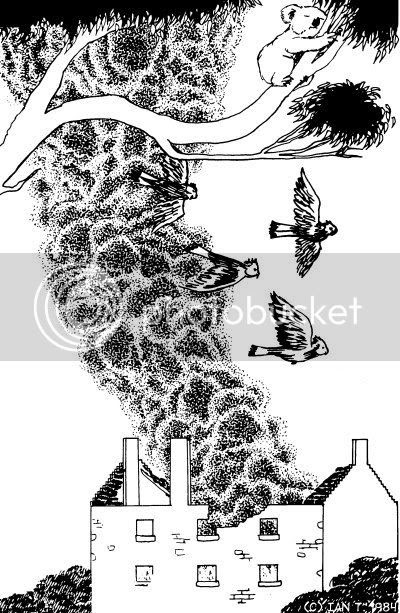 This picture is originally from Maelstrom #2, so was drawn a long time ago.

When the Illustration Friday topic of "Smoke" came up I couldn't really think of anything, but yesterday I remembered drawing this. The original picture is large - an A3 sized original comic page on board - and the smoke was done with dots using various-sized Rotring technical pens. It's in pure black-and-white, although I had laid some dotty screentones for greys in places, and would have done on the koala at the finishing stages.

I've meddled with this picture considerably, as the original had white frame borders, thought balloons and a few bits of the tree sticking out over the smoke. The full page has Maelstrom climbing down a tree on the left of this image, and various wildlife. I think part of what I intended was a juxtapositioning of the natural world and human-invoked disaster - fairly central to the theme of the story. There's also the contradiction between the indigenous and Western elements - something that became harder to reconcile as Maelstrom went on, and one reason I eventually abandoned the project.

The cracks in this version are visible to me, but hopefully the composition and technique still hold up. Hmm, maybe I should've posted a bigger version... then again, maybe not :).

Over the last few years I've done a lot of stories for local comics anthologies, but I'm thinking I'll give it a rest, at least for now. The main reason, which is a good thing, is that I have other things to work on.

Today I got back a rejected 2 pager I'd submitted to Going Down Swinging, which is doing a comics special issue. The cover letter is nicely detailed and the submissions process was transparent and well-flagged from beginning to end, so my only major regret about this rejection is that the piece is in a weird format (which will make it difficult to use elsewhere). So far, this year I've also had rejections from HA! magazine (also with good feedback and communication) and Gestalt Comics.

This is one side of the Australian comics coin. The other is that I've submitted a number of other pieces to local small press comics - all of them a lot of work - and these have been extensively delayed in seeing publication (if at all).

The combined effect is that plenty of time and effort has been expended on material that isn't seeing the light of day, at least in the short term. I really can't justify that, given all the other commitments in life right now.

On top of that, there are comics that actually see print, but I don't seem able to get hold of a copy myself (if any comic publishy types happen to read this - contributor copies are a good policy - particularly when there aren't many contributors!).

Maybe at some point I'll do an anthology of my own stuff - I've had a few people ask for this - but it can be expensive and fiddly, and being alone in a book doesn't really hold a lot of appeal for me (I like anthologies). Probably, it would be better to collect some of my ongoing serials together, but I wouldn't hold your breath :).

In any case, I will be drawing, just adopting a slightly different approach to what I do and where I submit it.

Not surprisingly (given the current board and changes to policies at the ABC) popular satirical show, The Glass House, has been axed: I didn't axe Glass House: PM.

Politicisation of the public broadcaster? This is consistent with the Changes to editorial policies at the ABC recently announced: "The changes imply a problem of bias at the ABC. No reputable study has found this to be the case."

It's creepy how the Right wing, given too much control, inevitably wants to suppress freedom of speech - but then capitalism and democracy are often at odds. Any criticism of an entrenched and powerful Government (our Federal government controls both Houses) is inevitably seen as "bias." The recent changes to cross-media ownership laws will more than likely concentrate all media power in a few hands.

I'll miss The Glass House - often crass, but always thoughtful and funny. But then, I miss a lot of things these days.