The June 2007 issue of Mania, #73 is out now, with Moth & Tanuki into their eighth colour adventure.

I'm completely happy with the way the story in this one worked out - good characters, a nice plot that includes a crime, some comic action and a decent gag to finish with. I don't ever want to get into formulaic work but, if I did, this could be a good episode to model on. There's no superheroey stuff this time though. There is one mistake (I'm including one each episode to check if you're awake :)) - they're only ever visible in print!

Relating to yesterday's post, Busker Jim and his dog put in a minor guest appearance - it seemed natural to include them, given the Dog Training School context. I don't consider any of my past characters completely done with - they're still around, just not currently being actively cast in things. This is the second time I've referenced an old strip in Moth & Tanuki - the earlier one was a Maelstrom reference (as seen in my Illustration Friday Invention pic.

Something from the vaults (and also the source of my Avatar). I post this for a reason that I'll make clear in a day or two :). Busker Jim was a comic strip I did for a few years (1984-1985) in a Melbourne newspaper called The City Extra - these are a few random samples. It was a different era, and I think humour (along with a lot else) has changed dramatically since then. I used to play alto and tenor saxophone (and keyboards) back then, but I've given up music for drawing... at least for now. 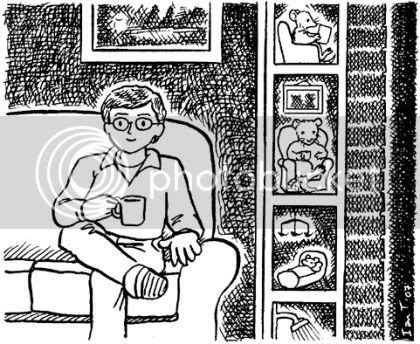 "You're never more than ten feet away from a rat."


(Actually, that's probably an urban myth, though it is true a lot of the time.) 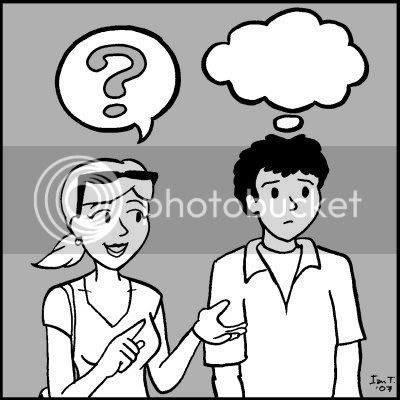 This simple one panel cartoon seemed to cover it for me for the Illustration Friday theme of "Remember."

It was going to just be a generic type cartoon but, when I thought about it, it seemed a good outing for Oliver and Maree, two characters from Joytown, a strip I developed a couple of years ago for a newspaper competition. I scripted about 50 strips and drew up 10 at the time, and I still like the characters, so I may work further with them at some point.

If this picture doesn't work for you, add the caption: "Remember?"