There are lots of new animal and bird album cover designs around, so I thought I'd kick off this latest run with just birds. A couple are truly iconic images focused on the bird as an image, there are a few hummingbirds and owls, and quite a few with birds more as an incidental, sometimes two-dimensional part of the design.

The first two have a similar feel, in spite of very different intent and music styles. The Clubbers Guide is a favourite - bird as a simple, imaginative device engaged with the concept - as is Andrew Bird's snooty budgie, which captures the witty spark of his music well. As for that Wilco cover, that is pure genius, capturing a mood perfectly in the most stylish way possible - a picture that says so much, both in content and design, and a very powerful image. Those owls on The Terrible Twos are way cute - let me know if you're recording a CD and want a cartoony design along those lines (or even a naturalistic cover illustration) - I'd like to do one. 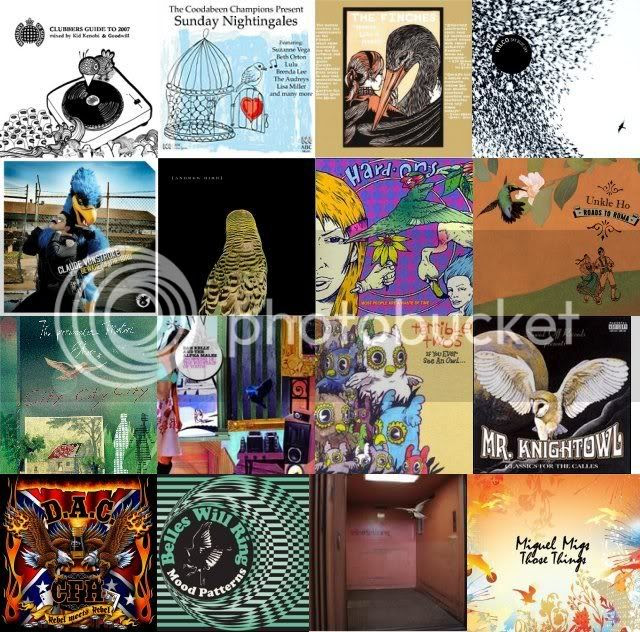 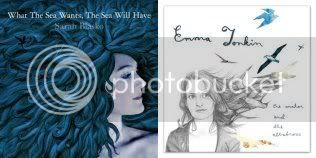 I thought about starting a separate category for female artists with birds in their hair, as demonstrated here by Sarah Blasko on What the Sea Wants the Sea Will Have and Emma Tonkin on The Anchor and the Albatross. These capture the vibe and themes of the respective albums perfectly, intelligently incorporating images of the artists themselves and the other elements (I hate albums that just have a boring photo of the artist on the cover).

Last but not least there is Hatebeak, the death metal band from Maryland, whose lead singer is an African grey parrot named Waldo (smart species, the African grey). The cover itself is evidently a tribute to Judas Priest. Waldo records separatelyfrom the band, due to a sensitivity to loud noises, so don't expect a tour. With the CD singles sold out, an album is in the works.

For a few years now I've been reviewing Australian comics, graphic novels and books of cartoons for Inkspot, the magazine of the Australian Cartoonists' Association. In #52, the latest issue, (also available online), I review Sarah Ellerton's fine manga-influenced fantasy saga Inverloch, along with George Haddon's Victoria Sketchbook and, because Haddon was such an influence on me as a kid, I thought I'd mention the latter here. 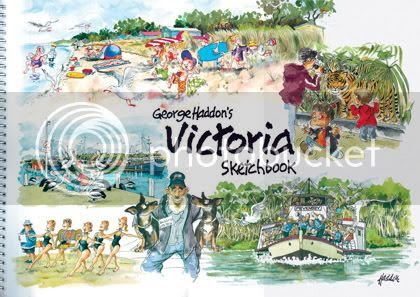 This huge book is a journey through my home state of Victoria, featuring many of my favourite places - an excellent reminder of all that’s here, as well as a beautiful artbook in its own right.

George Haddon's ink and watercolour centrefolds have been a feature of Royalauto (the members’ magazine for the Royal Automobile Association of Victoria) for many years now, with this series centring most of all on his artwork. The high quality reproductions of his artwork in Victoria Sketchbook positively glow. Reproduced at A3 on high quality paper, Haddon’s pen and brush illustrations evince the tangible atmosphere of a place and time - the people, the buildings, the scenery, the activity. Haddon has a long history of illustrating location sketchbooks, so is the perfect artist for this material.

For people who know Victoria, among the places featured in Victoria Sketchbook are everything from the aquatic delights of Anglesea surf, Rosebud beaches, Murray riverboats, the bays of Lakes Entrance and Port Campbell; the historic townships of Beechworth, Clunes and Swan Hill; inner-city vistas of Carlton, St. Kilda and Williamstown; the heights of The Dandenongs, Mount Macedon and Mount Hotham; and the wilds of Marysville, The Grampians and Phillip Island. 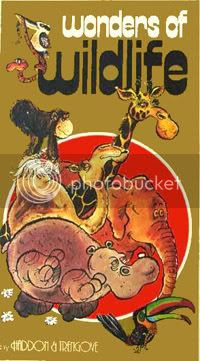 My personal favourite will always be Haddon & Trengove’s Wonders of Wildlife, which appeared many years ago in The Herald. I treasure a book collecting those classic strips (I used to cut them out, but have long since lost my collection, and not all of them are in the book). It’s wonderful to have a new Haddon book to add to my collection!

Moth and Tanuki in Mania 74 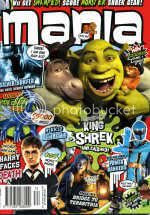 Seeing this in print was a revelation - I'd experimented with the colour scheme quite a bit this time, going for more pastel shades. While I was working on it I got dissatisfied with the look and was concerned it might not work, but it did! The colour scheme was partly necessitated by featuring lots of browns and purples for animal and evening shades.

My working title for this episode was "A Ferret to Remember" but everyone I mentioned this to hated it :). This title is much better. Again, I'm happy with the way it came out - a decent story and a good gag, with room for both Moth and Tanuki to do things.

There may be a bonus coming up in the next Mania.