Lately I've been feeling under a bit of creative pressure. The previous episode of Moth & Tanuki was a ridiculous amount of work, though I did feel the result justified it. I sent off another one on Monday, which was supposed to be a slightly easier episode to draw, which I suppose it was, but it presented different problems.

Anyway, I had lunch with a friend yesterday who said that my drawing was looking assured. It's funny, but I've tended to think I've always drawn pretty much the same, having achieved a level some time ago and tried to maintain it, but I actually think he's right - somehow elements have come together in a more relaxed way over the past year or two. It's still a struggle at times, but it apparently looks more effortless... which is a good thing :).

Lately, while drawing I've been revisiting Mike Oldfield's fascinating Amarok, and it hasn't lost its spell - when J was little she'd say "There's a monster in it!" and though it wasn't what she meant, in a sense, she was right, though that part does annoy me at times. There's something amazing about the musical textures, endless creativity and haunting resonance of this one. I think Oldfield meant "Amarok" in the sense of "I am a rock, I am an island," or maybe the giant wolf of Inuit mythology, but there are many possible meanings.

I bought L a full-size guitar last week because she was ready. Of course, it needed extensive tuning over a few days before it was really playable. I've been avoiding going near a musical instrument for some time (music and TV being the main things I gave up to find time to start drawing again). I couldn't put the guitar down! The TABs I found for some Amarok parts haven't helped either :). L's playing is progressing well when she can get it away from me!

I was home one day last week drawing and got out a Yamaha keyboard for L to play. Another mistake for me! L and J have been working through various of the pieces on there and one of mine turned up, all fully arranged - L kept saying "Did you really write this?" It's one of my better efforts - I think the lyrics are my best ever, and I wrote a good sax solo for it as well. Anyway, while I'm trying to encourage the children to use this keyboard (as well as do their proper music practice on other instruments), I'm trying to stay away from it myself.

If I take up music again, it would not be good for my comics...

I thought the subject matter of this one might be a little edgy, but the basic idea is actually based on a true anecdote I heard someone tell recently. 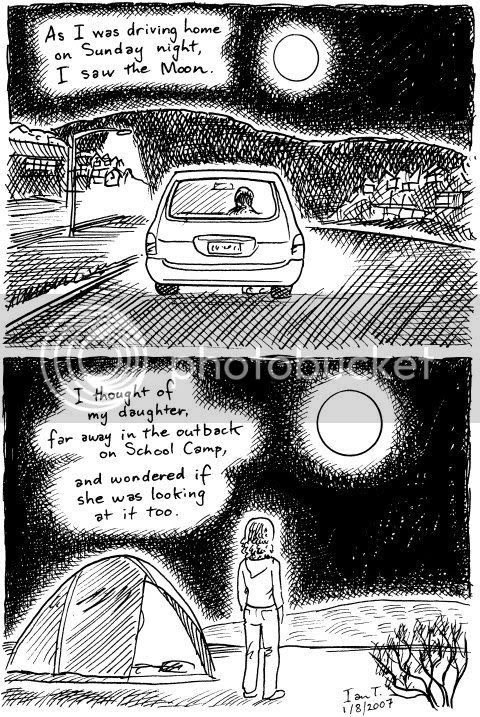