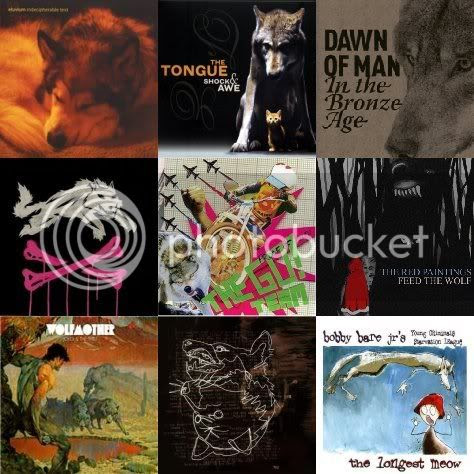 Wolves have never been more fashionable - at least if you go by CD covers! Always an interesting beast in iconic terms, the wolf is here featured on albums in a wide range of different styles. Nice to see Frazetta's work getting another outing with Wolfmother, but I particularly like the imagery on that Tongue cover. 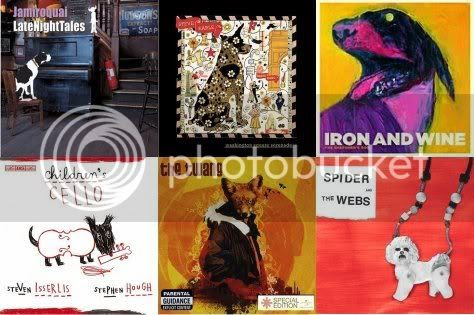 Mostly dogs, but one fox in there as well.

Fantasy movies can be difficult to get right, with far more unsuccessful than successful ones Though there have been a few good ones in the past, they mostly just end up being kind of B-grade. Fortunately, the genre is taken seriously these days, with better casting and acting and excellent possiblities due to digital effects (if used sensibly).

Here's a couple of current family fantasy films that I caught recently, both literary adaptations using the quest theme. 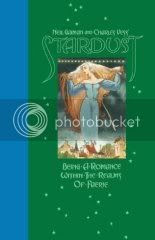 Stardust was a pleasant surprise in every respect - a fantasy film that actually managed to improve on the text of the book in a number of areas - who'd have thought that was possible?

The film isn't based on a graphic novel per se (as has been widely and incorrectly reported), but rather a text modern fairy tale by Neil Gaiman, sumptuously illustrated by Charles Vess. While there is a standard paperback (film tie-in) release everywhere at the moment, the magnificently Charles Vess illustrated edition (latest release ISBN 1-4012-1190-9) is the only version of this book to own, in my opinion - Vess' pictures bring out the characters in a complementary way with the narrative. I found the characterisation somewhat underdeveloped in the text alone, which is one reason the film benefited - being able to fill out those emotional depths and unseen character interactions (particularly the central romance). Actually, call me greedy, but I'd quite to see a full graphic novel rendering!

Set in an English village on the border of Faerie, this tale reminds me thematically of Lord Dunsany's (pre-Tolkien) lost classic The King of Elfland's Daughter, which is no bad thing! Tristan sets off into Faerie in search of a star for his aloof sweetheart Victoria, finding himself in a race that involves the royals, witches and pirates of this other world. Claire Danes is perfectly cast and the "name" actors are well-directed in performances that are campy, yet somewhat restrained, considering the material. It is (like the book) a little too gory for younger children, but otherwise well worth seeing on the big screen.

The week before we saw Stardust, we made sure we caught the first film adaptation of Susan Cooper's English children's classic, The Dark is Rising, adapted as a film under the title The Seeker: the Dark is Rising (an approach similar to that used with the "Narnia" movies).

This quintessentially British tale of past and present magic is bound to particular English landscapes, and historic and mythical traditions. Therefore I felt an initial sense of horror upon finding that the entire central cast, including Will, had been rewritten as Americans. The fact that they were good actors, who all performed well in their roles, never dispelled the glaring illogic of this decision. To further the literalism and misunderstanding of Cooper's work, there was an ungainly early sequence featuring security guards who literally transform into demons. Clearly, someone (in all probability, not the director) wanted to make a quite different film.

All in all, it's well directed and improves from there, and the always strong Christopher Eccleston puts in another fine performance as The Rider, but those early bad decisions hamstring what could have been a much more powerful fantasy film. A recut might improve it slightly, as apparently The Walker was filmed but left on the cutting room floor. As a "boy's own" mythic adventure with a straight ahead quest narrative, it works well enough, but my concern is that it will mean that another, more faithful film version of this book (or the rest of the series, for that matter) will never be made.

I'm not sure who the audience is for a Bowdlerised rendition of a well-loved book - a mistake Peter Jackson carefully avoided with his Lord of the Rings adaptations, walking a line between personal creative vision and fidelity to source.

Given the recent Earthsea miniseries and anime adaptation, perhaps Susan Cooper should get together with Ursula Le Guin to form a Society for Authors of Classic Children's Fantasy Whose Work is Always Screwed Up by Film Companies.