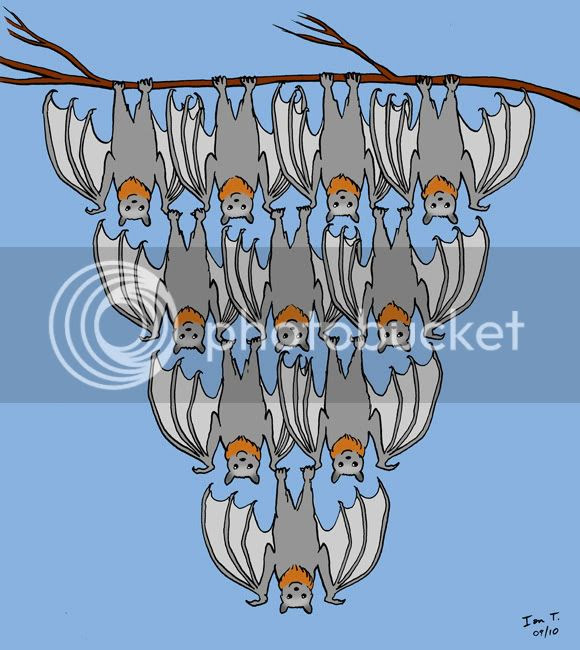 When I tried to think of something for this week's Illustration Friday topic this quickly sprang to mind.

I know I've pluralised the topic to "Acrobats", but maybe if you just focus on the top guy :). This is the flying fox equivalent of a human pyramid.

My intention was to render fur on the original sketch to make a complete black and white picture, but I scanned it in and added these colours instead. Maybe I will still finish the sketch in black and white as well, I dunno.

I'm really not sure what I think about the use of the likeness of William Barak on a building - Aboriginal leader's face to gaze from high-rise. Speaking as someone who is personally bothered by the idea of image appropriation (to the point where I try to avoid being in photographs), and also being slightly indigenous, this whole concept makes me uncomfortable. It also strikes me as deeply and sadly ironic. William Barak deserves to be remembered and commemorated, but in this way... I dunno. Maybe my feelings about this are irrational, but somehow it just seems wrong to me. 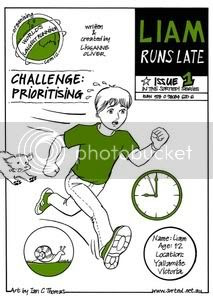 A new comic series, published by SORTED! organising & decluttering has just been launched. Created and written by bestselling author Lissanne Oliver, this series of 7 comics (available as PDF downloads), is aimed at children and teens.

I was pleased to draw the first in the series, Liam Runs Late, about a 12 year old boy who has difficulty prioritising his time.

This is exactly the kind of piece I enjoy drawing and is done in my most natural comic style, which isn't overly cartoony or very realistic, but a mix of both. I was also pleased to use hand-lettering, and it's made me question whether I should be reverting to doing that with other comics (particularly given that I've been digitally relettering some of my earlier pieces).

All in all, a short comic that manages to be both entertaining and informative. I love drawing animals and kids, and believe in what the good people at SORTED! are working to achieve. It was fun working with Lissanne and this was a pleasure to draw.