The third issue of Inscribe newspaper has been out for about a month now. It's a wonderful initiative, a community journal for writers and artists primarily located in the City of Darebin, in collaboration with the Publishing Lab at Northern Metropolitan Institute of TAFE. Print copies can be picked up at Northcote Town Hall and a variety of other locations in the area, or you can view or download it here.

In addition to a rich variety of prose, poetry and reviews by emerging (and some established) writers, there are evocative spot illustrations, and also - in this issue - an emphasis on comics! Included are comic related articles and works from artists including Nicki Greenberg, Mandy Ord, Michael Camilleri, Queenie Tan and Austina Wan (in collaboration with Chris Beach, Simon Sez and Mojo the Clown - and yes, the latter is real: I've met him!), plus a review by Dillon Naylor.

Comic highlights for me are the eye-catching centre pages, which are in a classic style, Tan's short strips and Mandy Ord's full back page comic rumination on literature.

I have a couple of small pieces in there which may have some familiarity to regular readers of this Blog - yes, you and you - "Fresh" on page 15 and "Creatively Frustrated" on page 22 are reworkings of pieces that have appeared here in some form. Given that I was a bit disappointed by the space allocated to the second piece - one of those personal musings that I think is likely to be misunderstood anyway - I thought I'd post it here. 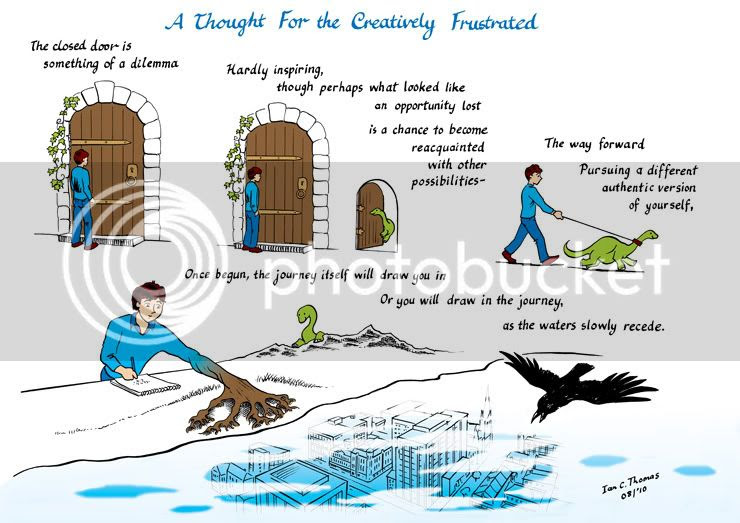 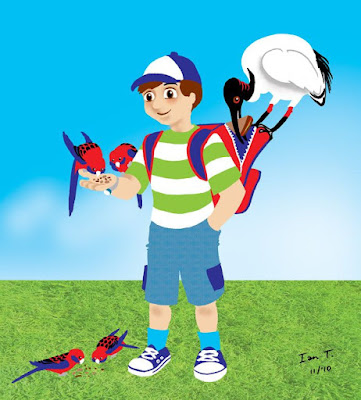 This week's Illustration Friday topic suggested lots of possibilities, but this one seemed liked a simple, clear depiction of the concept of "Sneaky."

My aim was to create a picture in a different style than my usual. While I have done pictures along these lines before, I enjoy the challenge of working completely in colour with minimal linework, although this did begin as a black-and-white sketch on paper. Please click on picture for larger image.

The scenario depicted could very easily occur at Healesville Sanctuary - visitors aren't supposed to feed the birds there and the white ibis can get very aggressive in their demands for food, so it is best not to encourage them!

With all the recent discussions in the media about the differences between comics and graphic novels, I'd been trying to search for the right phrase to express how I feel about this artform.

As I often find myself saying to people, I don't see the difference between comics and graphic novels or manga and comics or, for that matter, sequential graffiti and a graphic novella.

We don't try to describe songs, paintings or films in terms of their construction, they just are.

This isn't a "hybrid" artform, it's a holistic artform, and seemingly one in need of an entirely new tag. 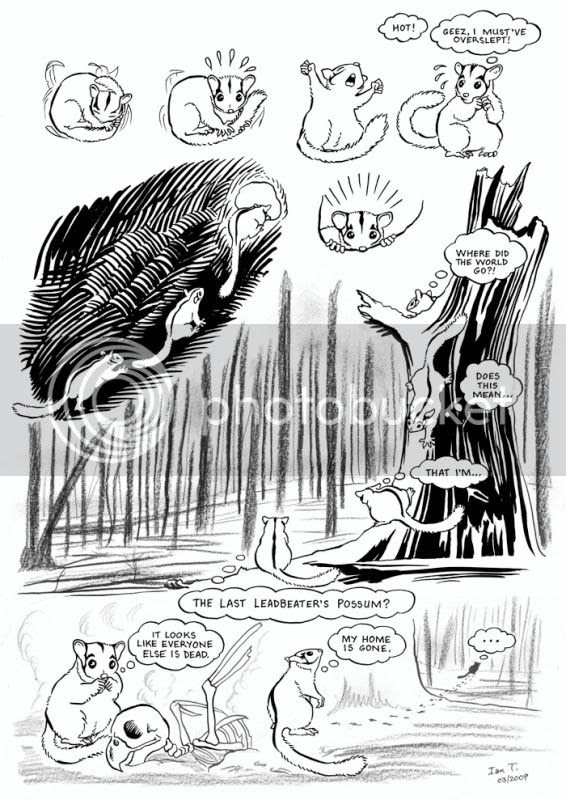 Call this one a combination of two Illustration Friday themes - this week's "Burning" and last week's "Afterwards."

Normally, I don't post complete comic pages - they have a tendency to later turn up in places I didn't intend or give permission for.

This piece was drawn immediately after the "Black Saturday" fires last year and was particularly my reaction to the loss of Marysville at the time. Somehow I wanted to express sympathy for the devastation there - the loss of property and lives - but also to render my concern for the loss of a particular species, the Leadbeater's possum, that had been incompetently handled by the logging industry, government and conservation alike.

There was potential for a much longer piece and I had plenty of ideas, but I don't think I wanted to draw it.

This year I decided to attend the Stanleys for the first time - not the actual Awards, but the two day Conference on Friday and Saturday. The Conference and Awards events are run by the Australian Cartoonists's Association.

The two days were busy and informative, with featured guests including the legendary Stan Goldberg, best known for his Archie Comics work, and amazing caricaturist/portraitist Jason Seiler. Their two talks on the first day were a revelation! Most inspiring were Goldberg's ruminations on storytelling and viewing his original artwork, and seeing firsthand Seiler's intricate working methods as he created his portrait of Julia Gillard from scratch, drawing directly in Photoshop.

I took the opportunity to explore the Wacom Intuos tablets for the first time and was astounded at how natural drawing directly onto the screen felt (having never used a tablet before). If I had the money I'd buy the drawing-board sized version tomorrow!

The second day featured an informative panel on animation, focused particularly on pitching and showcasing various cartoons in production - loads of fun! This was followed by two fantastic talks by Leigh Hobbs and Ron Tandberg - who shared lots of background regarding creative processes and working for publication - I think both of these artists could have another career doing standup comedy! I was also pleased to be able to talk to some of my favourite local artists in person - most of all George Haddon and Stephen Axelsen.

Another treat was the massive display of European comics in English being distributed in Australia by Book and Volume. I bought a lot of books from them, which will be nice additions to my collection. "Bande dessinée" is my favourite comics form and it's wonderful to finally be able to buy these books locally, and in English.

This year is the first that the Stanley Awards have included a new category for "Comic Book Art." I did try to spread the word about this in the Australian comics community and hope that more of our artists will join in future. The time seems right and I think this Convention offered more for Australian comickers than many recent actual comics events.

On a sidenote, something I did learn... I carry a (fairly informal) folio of my own work with me, which is organised mostly as a style book showing the different kinds of work I can do. I showed this to a fellow creator at one point, and then realised that I was kind of embarrassed by how personal many of the pieces are - a bit of an issue for comic creators, I guess. Also, I've realised that organising them grouped by style is a mistake, when you want to reflect the diversity of what you can do.