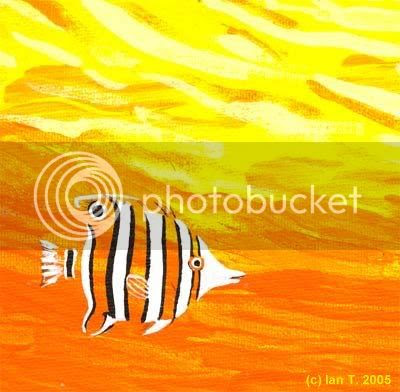 Thought I'd try something for Illustration Friday. This is painted in acrylics on canvas board. The subject matter isn't all that imaginative, but I wanted to do something with colour and space, working without an outline and removing the usual contextual assumption of aquatic as blue.

Today we looked at another possible Secondary School for J. - a smaller one, and not far out of our area. It was nice enough, if a bit rundown, but we actually got to go into some classes - the attitude and interactions of students and teachers, and the work they were doing, had a good atmosphere. The Vice Principal who showed us around was enthusiatic, if slightly nervous (he said "to be honest" a lot, but he was just that). There was a much greater emphasis on information technology - something which the alternative schools still largely reject - and on sport, with less on music and creative arts, which is probably to be expected in a smaller school, less able to support a range of subject options. This balance doesn't strike me as idea for J. though.

The technology question is something I've been pondering with regard to my own art. I love drawing and painting on paper or board, with real inks and paints, but there's no denying the effectiveness of a lot of techniques on the computer. I'm not inclined to reject the technical approach outright, and have started adding some touches of greys and colour on the computer where it seems necessary. Somehow, a lot of Photoshop and Illustrator work just looks generic to me, but I think it's always going to be horses for courses and a matter of using what's needed and appropriate. One of the strongest arguments I've seen in support of totally computer-generated comics art is Alpha Shade, all drawn in Flash, but more on that another day.

I work with computers every day and have seen how they've revolutionised information access and provision, though I still think traditional information and research methods have some merit (particularly when used in combination). As with most conflicting approaches, the right answer is probably somewhere in the middle-ground. I certainly think that's so for art.

Marco Polo Junior Versus the Red Dragon by Eric Porter

While I'm being a bit nostalgic, I've been searching for some obscure animated films that I vaguely remember, but no-one else seems to :).

And the really tough ones to find, made here in Australia!

And most interesting of all:

(*The Grendel picture is the cover to the newly released soundtrack CD from 1M1 records - ** The Marco Polo images are an original 1972 film poster available from the eBayer dealer, John Reid, and a 2002 animation still character sheet from Lobitos Creek Ranch animation).

This morning we looked at a possible High School - oops, I mean Secondary College - for J., if she misses out on the alternative school that we're really hoping she'll get into. We had our interview for the alternative school a few weeks ago, but evidently there are very few places and lots of families with children keen to fill them. That's a pity, because I think J. is exactly what they're looking for, given the arts/music/creative focus.

The school we looked at this morning is a Government school out of our area, and one with excellent academic results, so also able to be fairly selective, though it is definitely a matter of getting all the right paperwork done at the right time (soon!) to have a chance of enrolling J. there. They seem to have a strong focus on music and performing arts (along with sport), but also strengths in design, science and information technology, and the latter is something that the alternative school system seems to still completely reject (though I see their point in some ways). In addition, this school has a good focus in hands on skills such as textiles, cooking, automotive, wood and metalwork, which I think are lacking in most private schools.

It does make me think - I went to some of the crappiest government primary and high schools in the State, and I realize the consequent depressed morale at the time probably did no-one any good. It's funny how many writers want to claim they're from a lower-class background (as if it made a lot of difference then, in Australia), and how far from the truth it is for most of them. Anyway, I digress...

I have mixed feelings. Ideally, I'd still like J. to get into the alternative school, as I think it is the closest match to who she is, and who she will want to be later. We started as home-schooling parents, which is unusual in itself, I suppose, and that's probably still where my heart is with regard to education overall.

Something I read in The Age yesterday bugged me. There was a good article about Healesville Sanctuary's new platypus enclosure being opened, complete with a full monitoring system to see how they act with regard to breeding (the best speech I ever saw on this was Roy Slaven on Roy and H.G. Nelson's old show, boasting about how breeding platypuses in your backyard was eeeeasy!).

Anyway, the zoo keeper at Healesville reportedly said of the platypus: "Being one of only two monotremes alive - a mammal that lays eggs - very little is known about them." WROOONG!

There are 3 species of monotreme, and plenty is now known about the platypus (they're even studying near where I live). The main thing that grates is the ignorance of this statement from someone working so closely with the species!

Anyone who has seen a long-beaked (or New Guinea) echidna - which resembles a large furry kiwi with four legs - would be unlikely to overlook this amazing animal, and it desperately needs both promotion and conservation measures! It was also widespread here in prehistoric times and is a totally different animal to the common echidna in almost every respect (Genus, appearance, diet, habits). My usual gripe: How can we possibly conserve an animal if no-one knows it exists?!

Something I've been meaning to do for a while was to put up a page about Arthur Horner's marvellous, but sadly rather forgotten, comic strip, Colonel Pewter. While I was off I had a chance to finally collect some information and put a Colonel Pewter page together: this post is just an extract from there.

When I was growing up, I remember my father talking about a strip that he'd enjoyed some years ago in The Age newspaper, Colonel Pewter. He talked about various of the characters, including Glub, Colonel Pewter's Neanderthal butler, who Pewter dug out of his grounds where he'd been quick-frozen in Upper Palaeolithic times, and Pewter's great-nephew Martin.

A year or two later, The Age started reprinting the Colonel Pewter series where Glub runs in the Olympic Games, I think to coincide with the Moscow Olympic Games in 1980. Not only that, but Arthur Horner, the mysterious man behind this fantastic strip, suddenly re-emerged with the satirical Uriel Report, about an angel observing modern events, and many additional political cartoons. 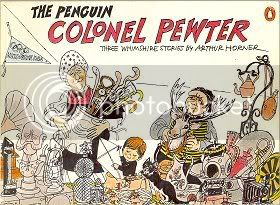 There have been three compilations of Colonel Pewter stories and they're a good starting point for anyone interested in finding out more, though they don't begin to cover these myriad extraordinary adventures. When I first started reading Colonel Pewter, it seemed to me these tales - and in some ways, his character - were linked to Lord Dunsany's eccentric (also sadly forgotten) short story character, Jorkens - always able to spin stories that began in the commonplace and went somewhere else altogether. In a sense, I feel that Daniel Reed's current Australian comic, The Crumpleton Experiments continues this tradition - albeit in a much darker form - with Professor Crumpleton being a British eccentric with much in common with both Pewter and Jorkens.

As wild adventure yarns, they're also akin to Carl Barks' masterful, consistently amazing and engaging Donald Duck/Uncle Scrooge stories, or Herge's Tintin (though the latter is certainly far more grounded in reality). Like these artists, Horner had a seemingly limitless imagination and amazing dexterity of vision and technique in the comics medium.

The most marvellous aspect of the stories for me - apart from the fact that the material was perfect for comic strip presentation - was the way it managed to present stories that were at once continuing adventure strips and also funny on a daily basis. The stories themselves were centred always around well-rendered characters, who were believable, however bizarre and wild the adventures became. Of course, some of the attitudes (as with some Barks material) reflect the times, but they still hold up remarkably well. The Penguin collection is an ideal place to start.

I'd be interested in hearing from Colonel Pewter fans, so please feel free to email me, sign my Guestbook or add Comments here.

This week I'm trying to spend full days working on "Moth & Tanuki" #4. It's progressing, but there are a couple of set-pieces that are quite a bit of work. Still, it's a decent script, albeit only the first part of a two parter (with cliffhanger ending). I tried to have all the pages pencilled in advance, but they still need some fine-tuning. I've done some inking on all except the last two pages so far, but there's still lots to do.

I dropped off another completed episode of that project I can't yet talk about, and I was pretty happy with the way that came out - the art was definitely improved by some suggestions from the author, and I'm enjoying collaborating.

J. has a project involving writing up a menu for a complete week of meals, and making tea tonight from scratch. We're having roast turkey with vegetables (which should be fairly straightforward).