Today we finally caught up with this film. I’m pleased (and a little surprised) to say that I thoroughly enjoyed Tim Burton’s Corpse Bride! What a tight, well-told, imaginative and effective piece of cinema this proved to be!

With the PG rating, I must admit I had some reservations about how sensitive children might deal with the issues of life and death that this film presents (not to mention the visions of cavorting skeletons and dead characters looking a little the worse for wear). It begins like a far more traditional children’s film using animated figures (such as those old Rankin Bass Christmas specials), with somewhat stilted figures inhabiting a well modelled village.

The contrasting colours – rendering the world of the living in black and white, but mostly greys, as opposed to the more colourful world of the dead – subtley provides a thematic foundation that lends credibility to this world and its characters.

I was sold at the point where Victor started playing the piano, with complete fidelity and accuracy to the piece we were hearing (a rarity in live action films, not to mention animation!). Already a sense of respect for both viewer and work was strikingly apparent, and I relaxed and enjoyed all that followed.

Skeletons – a beloved staple of animators – sing, dance and work through imaginative musical routines that hark right back to Disney’s early Danse Macabre Silly Symphony. They don’t outstay their welcome. In this film, even while working with a potentially high grossness factor, Burton and Co. manage to reign themselves in and maintain a sense of sweetness and wonder amid the darkness. What is pleasing is the sense Burton conveys of a somewhat macabre, but completely non-malevolent world of dead characters. While the living plot, scheme and manipulate, the dead are in many senses powerless, as well as for the most part good-humoured.

The tall and slender figures of the main characters has meant that shots are often set up almost diagonally - camerawork and lighting are skillfully combined with figure animation throughout. The voice acting is consistently strong, featuring Burton regulars Johnny Depp and Helena Bonham-Carter among a stellar cast.

There is real joy in the character designs. The figure of Emily, the Corpse Bride, is rendered romantically and with affection: even with a skeletal arm and leg, and a stray eyeball, she remains a charming and winsome creation. This character presents a slyly ironic realisation of the Victorian romantic vision of girls as frail and romantically death-like. Much of the story is driven by Emily, and also Victoria (the other young lady vying for Victor’s affections) and these two drive much of the plot between them.

One of the sweetest touches, and one where Burton shows real love for his characters and his material, is the gift that Emily gives to Victor – surprising, clever and completely appropriate.

Throughout this film I felt a sense of “How will Burton get out of this one?” as plot complications interwove with one another, providing conundrums and choices for a range of characters. What I felt in the end was a sense of having been driven deftly down some busy streets by an immensely skilled director at the top of his form: the film unfolds in some unexpected directions, but completely compelled me to follow. Overall, an imaginative film working with some macabre material, rendered with real joy and pathos - very enjoyable!

Merry Christmas! There are quite a few people I've been trying to leave blog messages for, but this computer keeps crashing. I plan to update my Links soon to include many of the Illustration Friday artists I've got to know this year. In the meantime, best wishes to anyone reading this for a safe and happy Christmas and New Year! 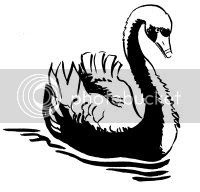 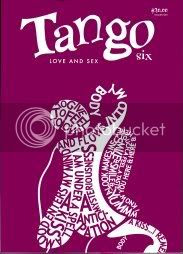 My piece is a 1 page story about swans, pretty much observed from life. Most of the stories in here appear to be observed from life to some extent - as a chronicle of the way men and women relate it can be pretty depressing, even while often amusing, and always fascinating! These stories range from the completely fanciful (a lovely wordless piece from Talnon) to the grittily realistic, and the standard of both art and story is consistently high.

Tango remains among the best graphic short story collections in this country and is highly recommended! For adult readers, it'd make a nice complement to your purchase of Operation Funnybone (see next post), and both are available at some of the usual locations, including Alternate Worlds. 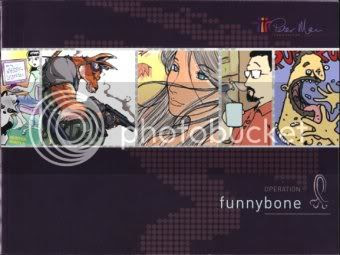 Operation Funnybone is out!

It's available (even as we speak) from:

This incredible anthology is in support of a great cause - The Peter MacCallum Cancer Centre - so please consider grabbing copies of Operation Funnybone as gifts, among your last minute Christmas shopping!

This brilliant, beautiful book is perfectly bound and presented in a classy, coffee-table book format. It captures the essence of where Australian comics artists are right now, across the whole range of styles and approaches. I've found myself reading it almost constantly since I landed my copy.

There's a huge amount of comics in there, along with detailed interviews with Australian comics creators. With so much reading it could be possible to lose sight of just how much comics work is included in this expansive book - there are lots of substantial stories, short pieces, strips, standalone art pieces - a bit of everything.

The written introductions by editor Glen Shearer and Holly Shorland convey a perfect sense of what this book and project are all about. Sadly, one of my favourite writers, Pamela Bone, wrote a moving final column in The Age today, as she is retiring due to terminal cancer, and she made some similar observations about attitudes and experiences to both Holly's Forward and her comic in this book, Drip, Drip, Drip. I think Holly's story is central to the heart of this project, and is a good place to begin reading. 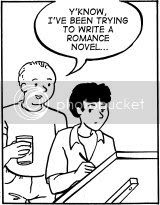 A special bonus for me is that so many favourite pieces that I haven't been able to own in print before - such as 24 hour webcomics and stories printed overseas - are in this book! In addition, most of the material here is altogether new. Australian comics are all about diversity and this is the best showcase of local comics artists I have ever seen - a tribute to the vision and persistence of Glen Shearer, who put it together. 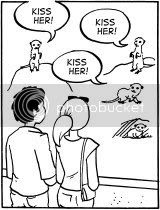 Different artists have chosen to contribute a variety of work. I went for a scattershot approach - a couple of pages of re-edited Riffin' to Oblivion, a page of Moth & Tanuki, along with some short pieces and a bunch of the Joytown comic strip I've had for a while - the pictures here are snipped from various of those.

The interviews give a lot of insight into the Australian comics scene, the motivations and frustrations of the artists, and the joy they find in creating their work. There's lots to laugh at, plenty to think about, and loads to keep coming back to read. 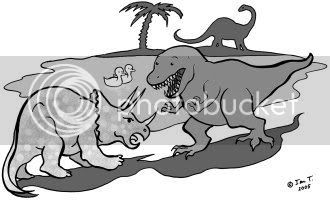 Operation Funnybone deserves a place in any artbook collection, graphic novel collection or library, and remember the proceeds are toward a great cause! 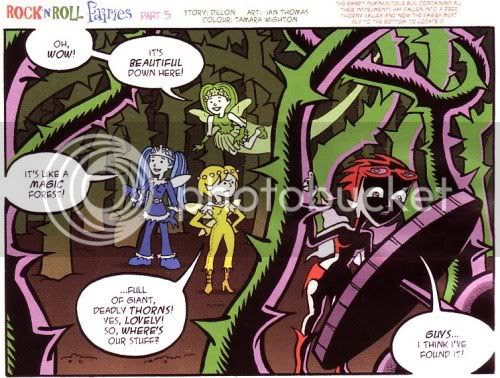 The current issue of Total Girl is a bumper issue for Summer 2006, and has 3 pages of the Rock 'N' Roll Fairies (written by Dillon, drawn by me). 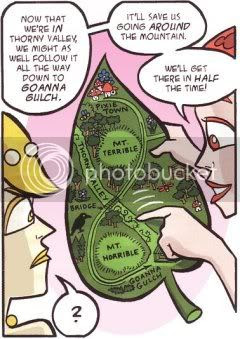 This one covers a fair bit of ground in terms of story - plenty of both plot and character - and it has some nice visual angles as they explore beneath the thorns (and even get to lowering poor old Monty down on a rope). I'm really happy with how this episode looks in print (these scans don't do it justice). The line densities came out really well and nice and black, and Tamara's colours make it glow, even down in this dark valley.

I enjoyed drawing the map a lot, and it gave me a chance to make reference to parts of Dillon's previous Rock 'N' Roll Fairies tale - there's the fence of Penni's place, one of the wild bees and the spider web (where they got guitar strings to restring Autumn's axe).

There's also some possible references to what lies ahead for the Fairies... 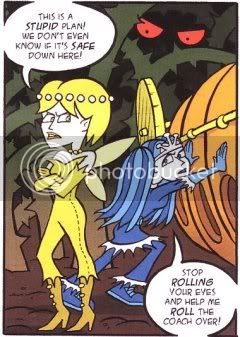 Lots of my comics are currently in print:

I'll post further on these and add some scans here soon. A friend said I should be thinking the glass was now half full with all this stuff in print, but I had to admit it wasn't in one sense - all the longer stories I've worked on are still not published. I don't want to get into self-publishing (pretty much ever again), but I might have to consider my options at some point.

There was an article in The Bulletin (13th December issue) that interviewed OF editor Glen Shearer, and Dillon Naylor, and it does a great roundup of the Australian comics scene as it currently stands.

It's also time to nominate your favourites for The Ledger Awards, but I'm a bit concerned that some great stuff (such as Tango and OF) have arrived too late in the year for people to have seen them. But then it's not about Awards - most of us are only doing this for one reason, after all.

My submission to Gestalt Comics has been sent off, and I'm just finishing off a colour piece for an upcoming anthro anthology, and have starting sketching an idea for a Portfolio project.

I've been good and resisted the impulse to scan a blank piece of paper for Illustration Friday, with the phrase "Imagine there's no Heaven." Hmm, I may yet succumb to temptation...

And otherwise, life is completely hectic as well!

The end of year function and disco (that I organised the music and lights for) was a blast! We're all feeling weary today, and I bet there's a lot of tired kids and parents, as we went until midnight, in spite of one parent wanting to pull the plug a lot earlier - I politely declined as everyone else seemed really happy. (The pic is from a thankyou card one of the girls made for me - thanks, Sarah!). 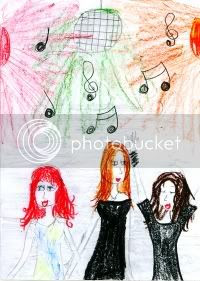 There were lashings of Black Eyed Peas and a little Red Hot Chili Peppers in the vegie department, along with Gwen Stefani, Avril, Anastacia, Kelly Clarkson, Kylie, Pink, etc. for the girls, and Spiderbait, Gorillaz, Kings of Leon, The Killers, John Butler, etc. for the boys. And they all danced! Our precarious lashing up of the mirror-ball to a ceiling-fan bracket worked perfectly (one father joked it wouldn't kill any boys if it fell down - as they don't dance - but they did!).

My criteria in selecting music was it had to be danceable and no "f" word, as I didn't want the other parents to crucify me - so rock, pop, rap, whatever, as long as you could dance to it. In a context of current dance stuff from the likes of OutKast and The Scissor Sisters, even vintage novelties like Y.M.C.A. and Locomotion went down perfectly!

In other ways it was a poignant evening, as it's the end of one journey and for this particular group of parents and children. There were performances from the children, and a presentation showing the classes through the years (though we were comparatively late starters, being homeschoolers initially). We've all grown so much, in so many ways, through the years. There's nothing like having children to bring home the passage of time.