Rather than whine on about other stuff (that may be coming in another post), I thought I'd post another bunch of animal CD covers - because I keep on falling over them, wherever I look! A couple of them were in new releases at Readings bookshop. 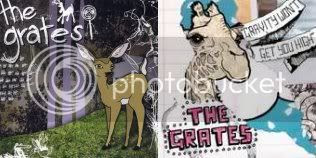 Fantastic Brisbane three piece, The Grates are in their own category! Their EP from last year, The Ouch And The Touch featured a catchy deer cover, but they proved their commitment to fine animal covers this month, with their debut album, Gravity Won't Get You High (featuring a Giraffe worthy of a Kevin Gilbert CD :)).

While it's nice to see The Drones go from a boring green cover (the initial release of Wait Long) to the fully realized fishy cover above (on In-Fidelity), it's depressing to see that the Australian release of The Like's Are You Thinking What I'm Thinking? dispensed with its beautiful cover (previously posted here), instead opting for a boring photo of the band. However, the video for Josh Pyke's Private Education features wonderful animation in keeping with the cover of the EP (previously posted here). 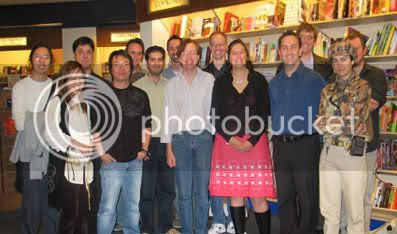 The official launch for Operation Funnybone yesterday morning at Reader's Feast bookshop was very enjoyable! Catching up with so many local comics artists in person was lots of fun, and most I met for the first time, even though many have been regular correspondents. The speeches covered the essence of the project - how it came into being, and the nature of the vital work of The Peter MacCallum Cancer Centre.

Alas, among random signings I managed to sign Daniel Reed's copy in the wrong place, and missed out on getting Peter to sign mine. Further reports can be found on Dean and Wen's LiveJournals. 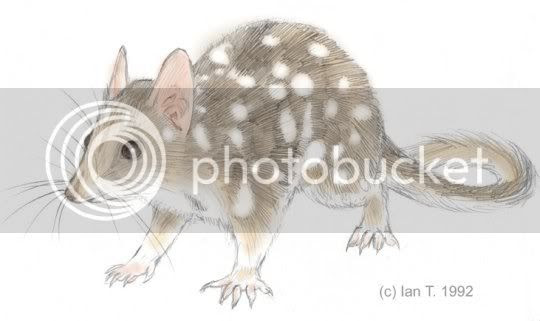 The first thing that sprang to mind for this topic for me was this beautiful animal, one of my favourites. Then I remembered I'd done a pencil sketch a long time ago, searched around and found it, and added a little bit of colour in Photoshop. The size and resolution of the pic here aren't as good as I'd like - it was done as a study in a particular pencil texture technique I was trying at the time, as this isn't clear enough to show it properly - I might replace the pic with a larger file later in the week.

This is an Eastern quoll, an animal that used to be common across eastern Australia - even to being found in the suburbs of Melbourne into the sixties, but now entirely extinct on the mainland and found only in Tasmania. If foxes become established in Tasmania, that could be the final blow. The related Western (chuditch) and Northern quolls are similarly embattled, as well as their bigger relative, the tiger quoll. Around the time I drew this I was fortunate enough to visit where Northern quolls were being studied at Monash University - they're now in decline largely due to the spread of the cane toad. 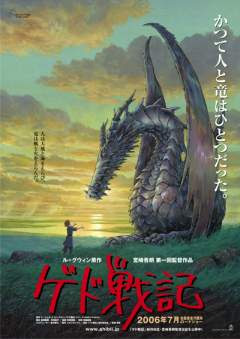 The great Japanese manga and anime master, Hiyao Miyazaki, is adapting Ursula Le Guin's Earthsea books into a film, which is great news, not least of all because it should prevent lesser film-makers from touching them.

Le Guin's Earthsea books (for a long-time a trilogy, then more recently a quartet, at last count five books plus a volume of short stories) are, in my opinion, modern literary masterpieces. The fantasy genre is overrun with inferior hack writers and pilfered ideas, but Ursula Le Guin can really write - beautiful, evocative prose with finely developed characters, a real sense of place, and the ability to surprise and take away your breath with a sudden change of direction, at once startling, but also beautifully fitting.

So often it seems there are ideas whose time has come, and they spring to imaginative life simultaneously in different places at once. For me, the idea of Miyazaki developing the Earthsea tales in a manga/anime style is absolutely ideal. A few years ago I developed Children of the Moon, a continuing four part fantasy about elves, dragons and death, drawn in a manga style and published in the anthology, Xuan Xuan. That style turned out to be ideal for the subject matter and clearly brought out the (fairly esoteric) ideas I wanted to convey.

I anticipate that the film of Tales from Earthsea will be among Miyazaki's finest work and do great justice to Ursula Le Guin's enduring classic.

Beware speeding Tanuki! This is from a piece I'm currently working on - I scanned one frame and threw in some bright web colours - but, hey, it matches the topic :). I thought I wasn't going to post for IF this week. I'm not sure about the skateboard shape - what do you reckon?

It's been an interesting few days.

Yesterday we went to the Warrandyte Festival, which was a lot of fun - 2,000 or so yellow plastic ducks were launched from a flying-fox in a race down the Yarra, there were lots of interesting stalls and an entertaining air-guitar competition. I picked up a lot of old K-Zone and Total Girl issues at the market, including some recent TG issues with my art (gasp, how could they?). The bands were good overall and the fireworks in the evening were well worth the chill factor.

Also, reptile guy Raymond Hoser was there, presenting his fascinating (and sardonically controversial) spin on scaly wildlife. I knew of him already due to his fine book, Australian Reptiles and Frogs, so this was a nice bonus. He focused largely on his many extremely venomous friends - taipans, king browns, copperheads, red-bellied black-snakes, etc. Yep, most venomous Australian snakebite doesn't hurt - untreated, you feel okay for an hour or so, then you die. It reminded me of an argument I had with my father-in-law a few years ago, about whether or not to kill a blacksnake. I felt somewhat vindicated about my non-kill position - if you leave snakes alone, your chance of getting bitten is pretty much nil.

Today I went for a job interview for a fairly senior management position somewhere else. If I did get this, it would mean some changes to my life, particularly my artwork, though I remain totally committed to continuing to draw the "Rock 'N' Roll Fairies."

That said, I've been submitting various pieces to different publications and had several bits of feedback last week along the lines of "We can't use this, but what about that?", which is encouraging. In one case I may have been pushing the margins a bit by submitting a comics page rather than just a panel or strip cartoon, but when I have something a bit essayish in mind it tends to come out this way :). I am learning to let go of some unplaced pieces, particularly if they need to be published quickly to have any real meaning. One offer I've had is very promising, if I can just get a chance to put a submission together...

I'm also attempting to co-publish a small-press anthology that has been languishing on the shelf for a few years now. I had a fantastic quote from a printer today, but they're set up to perfect bind anything over 60 pages (which normally I'd prefer, but it's wrong for this project). 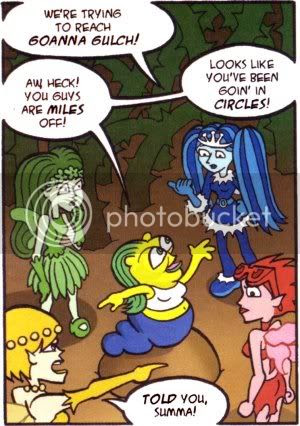 The April issue of Total Girl magazine is out and in your (Australian) Supermarket or Newsagent right now.

In this episode of Dillon's Rock 'N' Roll Fairies - drawn by me - they encounter a new character and the middle part of the story begins.

If all stories fall into the category of either The Iliad or The Odyssey, then we're about to cross from the latter, journey-type, narrative into something more like the former - except starring Fairies and lots of bugs!

Following on from my recent post about CD covers that feature animals, here's another batch! They're all attractive, imaginative and seem to me to capture something of the essence of the artists - quirky, inventive, poignant and dark.


I'd love to do a (non-computer) animal painting or drawing for a CD cover of something seriously going to be released - if anyone's interested, you know where to find me :). 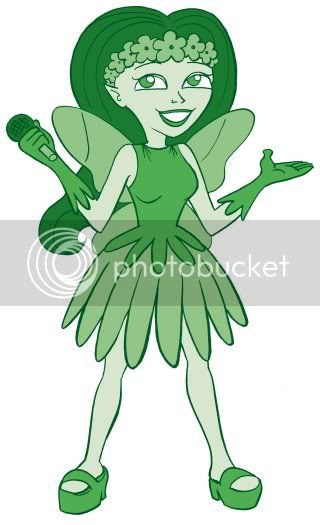 As soon as I told Jill that Illustration Friday this week was "Spring," she suggested this.

So here she is - Spring, the lead singer of Dillon Naylor's comic-strip band, The Rock 'N' Roll Fairies. This is one of a bunch of pictures I did when Dillon first suggested that I take over drawing the serial in Total Girl magazine.

I've said it before - they're wonderful character designs and a lot of fun to draw. There are slight differences in the way Dillon and I draw them - my Fairies tend to be slightly plumper - but our styles have proved pretty compatible overall.

I also had a painting that I did years ago in mind for this topic, but it's not that relevant and trying to fit it on my scanner and piece it together is just too hard right now, so maybe it'll fit some later IF topic.