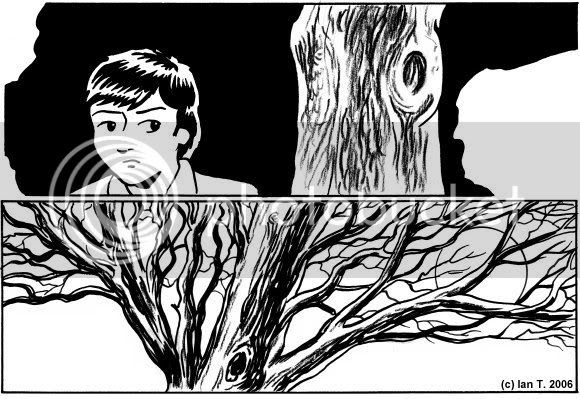 This is a couple of panels from the piece I'm currently working on. No, I don't have a phobia about trees (I love them!), but somehow the paranoid mood of this seemed to suit the Illustration Friday topic of "Phobia."

A couple of days away

I swapped some shifts at work, so we could go up to Marysville for a couple of days - I always find long walks through the tall trees helps clears the mind. Hopefully, this will lead to me inking the pages I pencilled the other day. The guineapig appears to be sulking - I didn't know guineapigs could sulk!

We didn't see any lyrebirds around Marysville this time, but one high point was seeing a flame robin in a tree - not a common sight and very striking. As we approached it from a distance I tried to point it out the J and L, who said: "It looks like an apple." The breast of this robin is a very bright orange colour and it's otherwise black-and-white (very similar to a British flycatcher pic Cherriepie had on her blog a while ago). We often get yellow, occasionally scarlet (and rarely pink) robins around where I live, but seeing them is always surprising.

Thanks to Cheruboy for mentioning me in his speech for a School Project about cartoons - greatly appreciated!

The short piece I'm struggling with right now was my original idea for this submission, which I returned to after writing a few other things that I wasn't happy with. One of these was a six page script that is close to being a strong piece, but it still needs some tweaking for it to be right and the theme to fully emerge. I wouldn't have time to draw it for this submission now anyway, but writing it was kind of personal and oddly, a bit painful, but maybe that's a good thing :).

I'm undergoing a period of creative frustration, but maybe I've turned the corner. Rather than moan about it, here's something completely different - a clip I saw on Rage a few weeks ago and thought was just amazingly simple and inventive - try organising a band into something this co-ordinated!

The following pic might disturb some readers - if you're concerned, please don't scroll down. This is based on local news from last week. How safe is an endangered, protected species in a National Park? How often are there no witnesses to this sort of thing?

The two fishermen from Philip Island "face a range of wildlife charges including hunting and destroying wildlife, injuring protected wildlife, using a gun to take wildlife and using a gun in a national park."

"The charges related to an incident last Wednesday when dozens of seals were found dead or dying after allegedly being shot on Kanowna Island" - Fishermen fire at seal colony, leaving 40 dead.

"The fur seals are the world's fourth rarest seal species and their deaths provoked outrage, amid claims fishermen shot the animals to protect their catch." 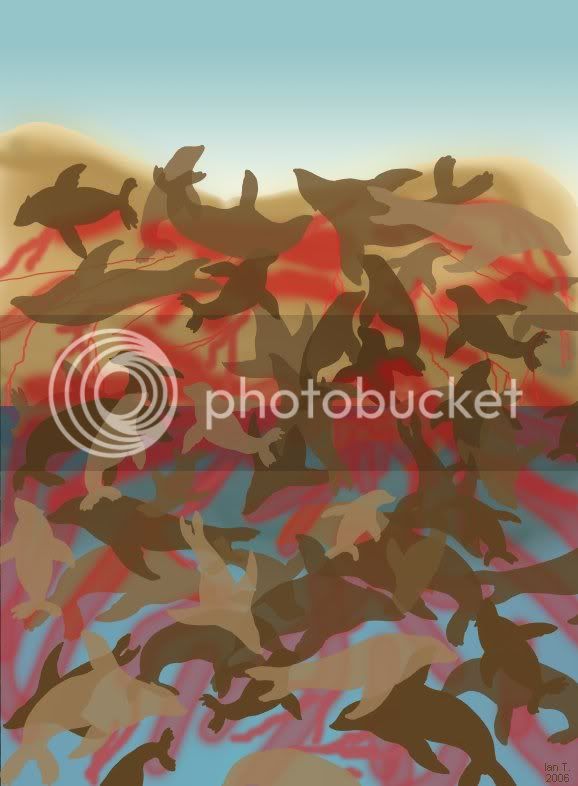 Apologies for two such downbeat posts in a row.

The latest potential casualty was reported in The Age: Battle for Baw Baw frog: log it and see

"A leaked PaperlinX memo says VicForests has recommended the logging of the 10 Baw Baw frog environmental coupes on the plateau's southern escarpment."

"The frog, found only in Victoria, has all but disappeared, with the population falling to a few hundred from up to 15,000 in 1984. The proposal to log the 200 hectares is part of the habitat experimental harvesting program to determine if clearing would harm the frog, which is on the International Union for the Conservation of Nature red list, and is protected under state and national laws."

As previously noted, a cynic might think removal of critically endangered species from logging areas was a priority. This isn't a new or local phenomena - a famous U.S. example:
The Ivory-Billed Woodpecker
In 1938, the last 20 were located in an old-growth forest called the Singer Tract in Louisiana. The logging rights were held by the Chicago Mill & Lumber Company, who brushed aside pleas from governors and the National Audubon Society, and clearcut the forest. The last known Ivory-billed Woodpecker, was gone by 1944.
Scott Weidensaul, "Ghost of a chance" Smithsonian MagazineAugust 2005 pp 97–102.