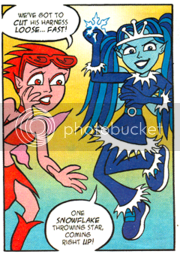 The November issue of Total Girl is in store now. Dillon's Rock 'N' Roll Fairies have encountered a large blue toad on a rickety bridge and things are hotting up! I had a lot of fun drawing this one - here's a sample closeup shot of Summa and Winter. 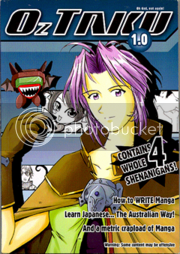 Also, out now is the newly revamped OzTAKU, issue 1:0! While it has been hard to find until now (available at Manifest and Supernova only), it should be getting broad distribution soon in book and game shops throughout Australia.

My piece is a straight reprint of the very first Moth & Tanuki - originally seen in OzTAKU #2. If you haven't caught up with these guys, now's the time! There's a sample page below. It may not look that good onscreen due to the fact that I used dotty screentones for a traditional pulpy look, but it looks great in print! No prizes for spotting the only spelling mistake I've ever made in print :).

All in all, I totally recommend OzTAKU 1:0 - it's a consistent, packed Ausmanga anthology full of exciting stories and fantastic art! 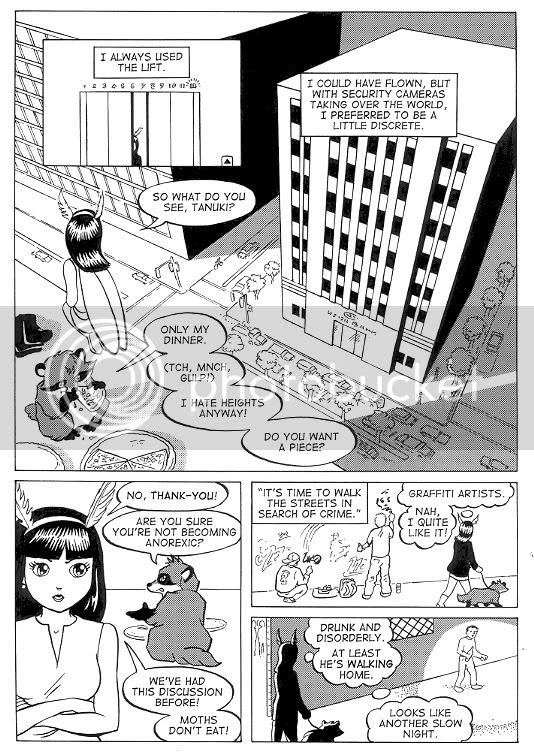 "Down, down we go, we're so very low,
To the hell of the deep sunk mines,
But we gather the proudest gems that glow,
When the crown of the despot shines."
Ernest Jones - Song of the Lower Classes (c1848, pub. 1952)

This is going to be a political post and I make no apologies for that.

Now that the Howard government (an Australian Federal government of already highly questionable morality) has absolute power in both Houses of Parliament, they are moving rapidly forward with their radically rightwing agenda. That there appears to be no economic need whatsoever should surprise no-one as this is clearly ideology driven.

I had wondered why single-mothers, injured workers and others on government benefits were being forced to seek employment, but now it becomes clear. The Howard government's radical industrial relations legislation is clearly set to strip workers' rights to an extreme degree, and there will be a need for an available, exploitable underclass to fill vacancies created by unskilled workers who might be unwilling to sign a (new) minimum wage individual contract.

A new report, from Sydney University's Australian Centre for Industrial Relations Reseach and Training, showed that New Zealand's deregulatory system decreased hourly wage rates by 18% for ordinary time employees and 44% for part-time workers. No-one should confuse the ultimate goals and ideals of capitalism with democracy! As Paul Robinson writes in The Age today - John Stuart Mill observed in 1848 that "under conditions of competition, standards are set by the morally least reputable agent."

Former Labor Prime Minister, Bob Hawke, in a lecture on Monday described Howard's Industrial Relations plans as "an assault on the very core of what generations of our citizens have been proud to boast of at home and abroad as the essence of the Australian character: the fair go; the belief that might is not right; that it is not those already with privilege who should be protected by government but the most vulnerable in our society; the encouragement of enterprise, not exploitation."

I know my grandfather would have agreed with him, and so do I.

Please click on picture and resize for larger version: 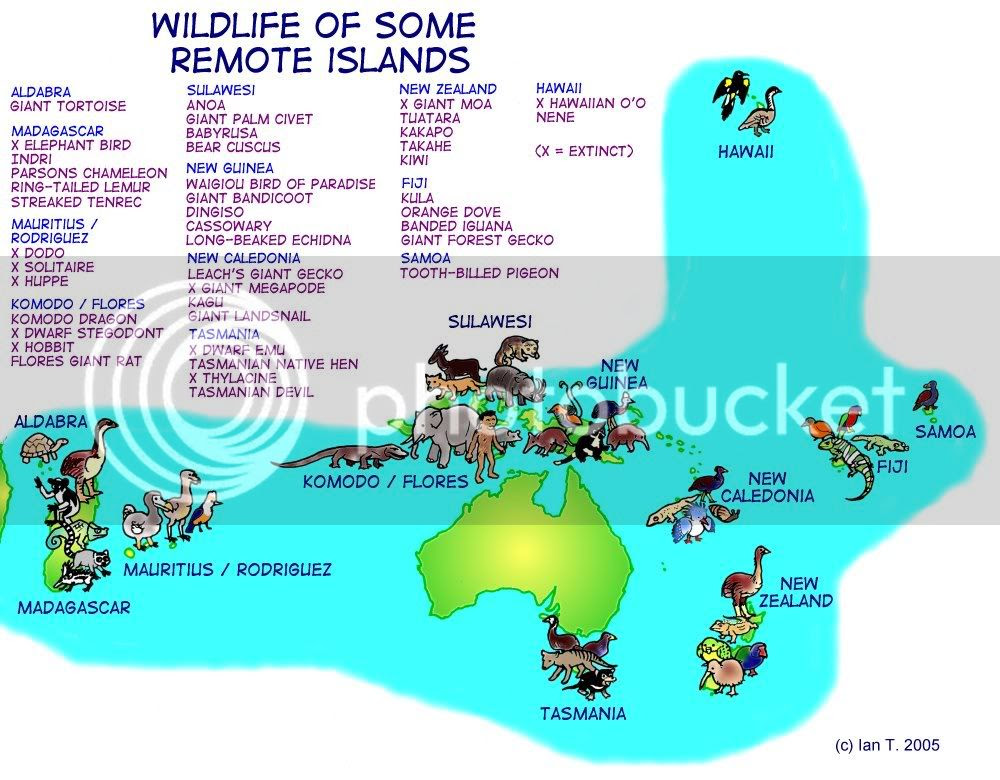 For me, "Remote" really brought up the concept of geographical isolation. Two excellent books have gotten me thinking about island zoology and biodiversity again: David Quammen's The Song of the Dodo and the beautiful photographic book South Sea Islands: a Natural History by Rod Morris and Alison Ballance. I also had a number of Tim Flannery's books in mind while composing this.

This is very much an Illustration (complete with explanatory text) rather than a work of art :). I've wanted to do maps along these lines for a while. This is actually pared down a lot - I took out quite a few, such as the Galapagos Islands, French Polynesia and even The Falkland Islands - just to make it smaller. In a sense it covers a lot of the ground followed by great naturalist Alfred Russel Wallace, the other, somewhat forgotten evolutionist whose observations in these regions brought him to the same conclusions (at the same time) as Darwin. The Southeast Asian cutoff is along the Wallace Line.

I remember a long time ago looking at pictures of eastern and western spinebills and noticing how clearly their diversification - different realizations of the same pattern - showed evolution in action. Nowhere is speciation made more clear than on remote, isolated islands. These places have to "make do" with the species that get there, either by being cut off from main landmasses at some point (allowing for the survival of primitive, relict families), or by being reachable only by swimming, flight or floating on vegetation. Following this haphazard species arrival fauna evolves into the available niches, though usually following a pattern of dwarfing of large species and enlarging small ones.

Of course, this all changes when modern people arrive, leading invariably to the high extinction rate among island species. For that reason, quite a few of the creatures shown here are extinct in comparatively recent times. However, many of them do still survive - at least until the Greenhouse Effect gets worse - and these include some of the most bizarre birds and beasties.

There is also inter-relationship between many of these species, such as the dodo and solitaire (and those mourning the dodo might like to look closely at the tooth-billed pigeon of Samoa). These three are clearly pigeon family descendants - other "arrival" species evolved from mainland species include the Fijian banded iguana and the Nene (Hawaiian goose), evidently evolved from the green iguana and Canada goose respectively.

And then there's Australian mainland - which is a study of geographical isolation all on its own - but outside the parameters I set myself here :).

It's been a strange week. I owe some email replies, which I'm keend to get to - I'm definitely thinking a lot about what I'd like to write...

Any Illustration Friday people reading this - I did plan to do a picture for "Lost" and even bought some paper specifically to use for a collage type piece, but just haven't had a chance.

I had a job interview on Wednesday for an interesting sounding position, but I think it's logistically impossible, for a number of reasons (mostly money). That's left me feeling a bit between things. We'll see...

At the moment J and I are hard at work on her school project, which is building a model castle. We made the four turrets out of postit tubes and the rest out of architectural modelling foam (sheets covered with a paper surface), which is perfect for making buildings.

Dillon brought back an amazing array of comics from Supernova, which I'm going to enjoy ploughing through - Australian comics are definitely alive and kicking! My only disappointment is that I've got so much work sitting on various people's shelves awaiting publication - I had hoped some of these would've been out for Supernova.

I just heard from Phase Two Comics that they're planning on picking up the mantle of OzComics Magazine and asking whether I'd like to draw/review for them. I'd like to, but I'm going to have to think about it - my time commitments are getting pretty tight.

There are lots of birds still in the garden. J has trained one particular king parrot to hand feed, and I've been hearing kookaburras again, and the peacock meows most nights, so Spring is definitely here. On Wednesday I had to stop the car for an unfamiliar bird crossing the road, which turned out to be a pheasant of some sort! There's no telling what will pop out of the jungle around here.

I have lots of things I'd like to write about - some music to review, various comics stuff - I'm not promising though...

I thought about the "Lost" topic a bit and pretty much settled on drawing a room with my glasses hidden in it somewhere, but didn't get time. 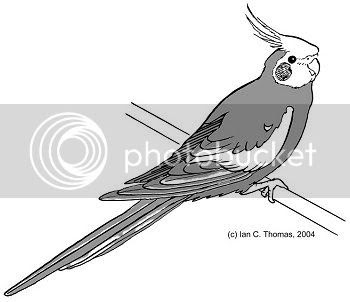 So here's an old "Lost" picture. Anyone who has read the archives here will have already seen this picture and know the sorry saga of Percy, our wonderful talking cockatiel who flew off early last year. This picture (in black and white, he's really the usual colours) was for a "Lost" flyer we put in letterboxes. After tracing some 30-40 found cockatiels, we eventually located exactly where he had gone (on the same day he was lost) due to several neighbours of the finders. Unfortunately, that didn't help us get him back... maybe someday I'll do a comic about it!

I still can't convince myself that clipping birds is a good idea - it definitely makes them unfit and unhealthy, but maybe as an occasional thing it's okay. And I'm also never going to be keen on keeping pets in cages (apart from to sleep), so that's not a solution either.

Percy was quite a character. Parrots are at the top end of intelligent bird families, with cockatoos among the brightest, so it shouldn't be a surprise that cockatiels can be brainy, though I've come to realize that, even for a cockatiel, Percy was exceptionally smart. I was amazed at the amount of tunes and phrases he could recall, how much he could be trained and his general sociability with all people and animals. He did haul off and attack me occasionally (which is due to hormones once males reach a certain age) so caution can be needed with cockatiels at times, particularly with children, though good training will always help.

My copy of The Stanleys Yearbook arrived last week, and my entry in there includes the following samples of published comics work from the past year (July 2004 - June 2005). There's a sample page from Riffin' to Oblivion and part of a page from One Tiger Day. These are up for nomination (by Australian Cartoonists' Association members) for the 2005 Stanley Awards. Representing them this way (limited samples) is problematical, as it does tend to work against the humour of the pieces, particularly the extended satirical writing style I mostly use. I think they represent my art pretty well though. 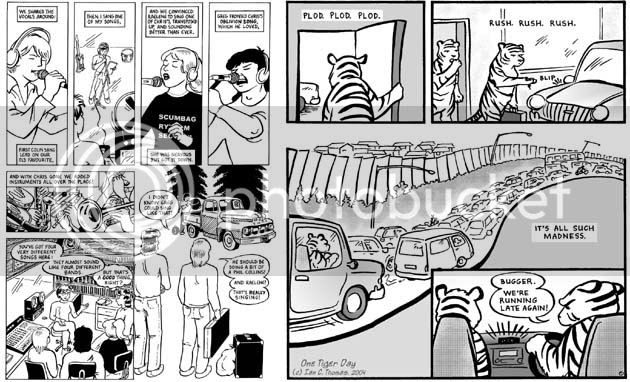 As seen on the ACA Member Page - Ian Thomas

These days I tend to shy away from animation as it can be resource/time intensive. I was pleasantly surprised by how little time this took to make! I used the Animation Shop that comes with Paintshop Pro. It's not perfect by any means and I had to make it a small enough filesize (under 250K) to upload.